A cold "invasion" in our country, with very low local temperatures, starts tonight, according to the latest forecast data of the National Observatory of Athens / meteo.gr.

This cold invasion, which will be accompanied by snowfall in much of the mainland, will cause bad weather "Leandros" from Thursday 14 January to Monday 18 January.

Temperatures near the surface will drop to negative levels even in the lowlands overnight, while in areas of the central and northern country with higher altitude there will be total frost from Saturday 16 January to Monday 18 January. 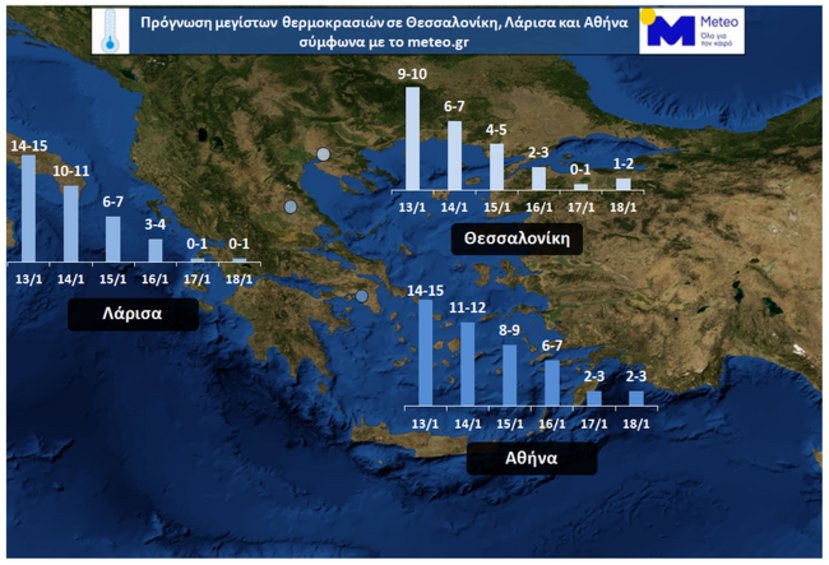 Χιονοπτώσεις αναμένονται από τον «Λέανδρο» ακόμη και σε πεδινές περιοχές της Μακεδονίας, of Thrace and Thessaly, but also in the mountains and semi-mountains of the rest of the mainland from Thursday night. Although there will be periods of improved weather between snowfalls, the strong cold, especially at night, is expected to cause problems.
SOURCE: meteo.gr

Rains and sporadic thunderstorms occur from this morning, mainly in the western parts of the country, καθώς είναι σε εξέλιξη το...

Weather: Deterioration from noon with heavy rains and thunderstorms – Where it will snow

According to the forecast data of the National Observatory of Athens / meteo.gr, successive waves of bad weather, moving from northwest to ...

Extraordinary bulletin of deteriorating weather issued by the National Meteorological Service. As indicated, successive barometric lows are predicted to worsen the ...