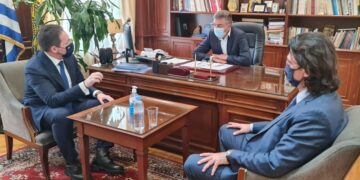 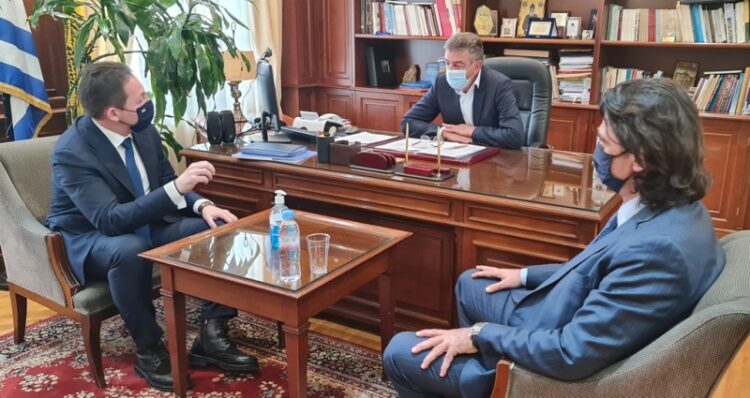 The visit of the Deputy Minister of Interior Stelios Petsas to the prefecture of Grevena was crowned with absolute success, on the initiative of the Member of Parliament of the region Mr.. Andrea Patsi.

The Member of Parliament had taken care to inform the Minister in advance, as a result, the discussions with the two Mayors of the prefecture and the present municipal councilors are substantial and lead to an immediate solution of problems, such as that of the water supply of the Great Siren.

The first stop of the tour of the Deputy Minister of Interior was the Deskati of Grevena. There, Mr.. Petsas met with Mayor Deskatis Mr.. D. Ribbon in the presence of Mr.. Patsi and a meeting followed with the participation of the Deputy Mayors Mr.. B. Tegou and X.. Orphanides.

The Deputy Minister of Interior was informed about the projects that, or have already been submitted, or are going to join the "Antonis Tritsis" Program, total height up to 6 million. euros but also those of the "Philodimos" program.

The meeting proved to be very constructive, as Mr.. Petsas pledged for the immediate launch of the large water supply project of the community of the Great Siren, budget 960.000 euro, which will solve once and for all the chronic problem of water scarcity that plagues the village, while DEYAG already has a study ready for funding.

In addition, The “Antonis Tritsis” Program was discussed in detail, and more specifically the height actions 22 million euros that the Municipal Authority has included and which Mr.. Minister described as completely realistic and workable.

End, Special mention was made of the completion of the transfer of the City Plan but also of the substantial support of the ski center of Vasilitsa.

They will visit the Prefecture of Grevena on Tuesday 20 April, the Deputy Minister of the Interior, responsible for local government issues, K. Stelios ...

Message from the Member of Parliament for the Prefecture of Grevena of New Democracy, K. Andrea Patsi for the anniversary of the Greek Revolution

Message for the anniversary of the Greek Revolution This year, at 25 Of March 2021 will celebrate its 200th anniversary ...

Statement of the Member of Parliament for the Prefecture of Grevena of New Democracy, K. Andrea Patsi for the integration of Communities of PE. Grevena in the areas affected by Special Disadvantages

Declaration on the accession of Communities of PE. Grevena in the areas affected by Special Disadvantages The agricultural sector is the ...

Meeting with the Deputy Minister of Interior, K. Stelio Petsa was made by the Member of Parliament for the Prefecture of Grevena of the New Democracy, K. Andreas Patsis.

Meeting with the Deputy Minister of Interior, K. Stelio Petsa performed on Monday afternoon 08 March and time 19:00 The...