From the 16 Coronavirus vaccination for the general population begins in January.

Already in our country they have become almost 50.000 vaccinations (49.661 until yesterday afternoon as informed by the Secretary General of Primary Health Care, Marios Themistocleous), with the rhythms being slow, but to increase gradually now.

As stressed by Mr.. Themistocles, Greece has secured 26.090.000 doses, corresponding to vaccination 15.450.000 citizens. Soon, as Nikos Hardalias recently noted in a post, the daily numbers of vaccinations will be doubled, with the government
Vaccination begins in private hospitals

Vaccination of health personnel in private hospitals is expected to begin this week, while in the coming days the vaccination of private freelance doctors will begin, dentists and pharmacists. The vaccines are expected to be delivered to all parts of the country by mid-February. From the 16 January, the vaccine will also be given to the general public, with those who are over being the first to be vaccinated 85 years.
The timetable for receiving the vaccines

As announced, by the end of January our country will receive from Pfizer-BioNTech 427.050 doses, at the end of February 362.700 doses, while in March it will receive others 558.675 doses. Total number of vaccines to be received by Pfizer by March, will amount to 1.348.425 doses, number is slightly higher than in previous announcements. In these quantities there is a case to be added 1.180.930 installments from Pfizer's additional agreement with the European Commission.

Delivery is expected after the approval of the Moderna vaccine 20.000 installments within January, 115.000 doses in February and 105.000 doses in March. Moderna's total deliveries for the first quarter are 240.000 doses.

also, to these deliveries are expected to be added those of the AstraZeneca vaccine, if approved by Coreper. So, the first delivery will take place in February and will be over 400.000 installments, with an increase in deliveries in the coming months.

End, as it became known, Johnson vaccine approval is expected earlier & Johnson, which is unique and much easier to manage.
Source: iefimerida.gr

Coronavirus vaccine: What happens to the booster dose and who should do it

There has been a lot of discussion lately about whether or not the booster dose is necessary.. 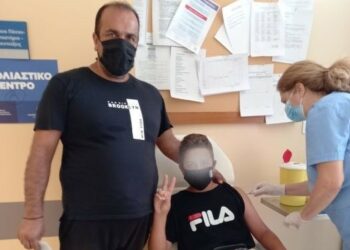 Ptolemy: First vaccination of a 13-year-old at Bodosakeio Hospital

The first vaccination of a thirteen-year-old against COVID-19 took place today at the Bodossaki Hospital of Ptolemaida. According to information, the 13-year-old, that the ...

Percentage of vaccinated by country. Greece is low compared to Western Europe (Map)

See the map that shows the percentage of vaccinations in European countries and beyond. Greece low in relation ...