Clogged nose: What to do for better sleep

The problems of women's unemployment in the Kozani PE were mentioned by Paraskevi Vryzidou MP N. Kozani in the teleconference of the Women Network of the French Parliamentary Assembly

EKNK demands the cancellation of the plan for the creation of a floating photovoltaic in Lake Polyphytos.

In a charged atmosphere and with a strong clash between government and opposition, The bill on demonstrations is being voted on in Parliament today.

In today's second and last meeting with interest, the speech of Fofi Gennimata is expected, while the Prime Minister Kyriakos Mitsotakis will be placed in 12:30. Michalis Chrysochoidis did everything,what could be done so that the bill is not passed only with the votes of the New Democracy MPs. For’ This has led to changes in many of its provisions, adopting most of the proposals of the Movement for Change..
Reactions within KINAL for the bill, but votes "yes"

The Movement for Change issued a special statement yesterday saying that it had rewritten the bill with institutional guarantees and that without its own intervention the New Democracy would "criminalize" the demonstrations.. However, within the party, things are not rosy, as there are reactions from at least four MPs who did not want to vote on the bill until last night.

It is characteristic that Haris Kastanidis, one of the MPs who disagree with the support offered by KINAL in the legislation, in his speech last night he unleashed fists against the bill supporting, including, that "it is contrary to legal and political culture", "Reverses the presumption of innocence to the presumption of guilt" and "does not protect party rallies and third-party trade unions".

The other MPs who are reacting are Mr. Michalis Katrinis, George Moulkiotis and Andreas Poulas, while according to information, George Papandreou, who had a discussion yesterday, also opposes the vote on the bill.’ of this with Fofi Gennimata. In Charilaou Trikoupi, they recognize their disagreements 4 MPs, but clarified that they will respect the opinion of the majority of the Central Committee and will vote in favor of the bill since the vote is nominal.
Chrysochoidis: The law will be enforced

However, Michalis Chrysochoidis publicly thanked KINAL yesterday for the support it provides to the bill and assured the plenary that the bill will in any case be implemented., because it responds to the demand of many, as for the first time in the country's post-colonial history, a regulatory framework for marches so that the right of assembly to exercise normally, but without the overwhelming majority of the rest of the citizens suffering.

"The law will be enforced. I say this with determination. It is not a declaration of authoritarianism. It is an act of responsibility. The law will be enforced because it obeys common sense. Eliminates anachronisms called rights. The bill ensures the exercise of rights to those who want to protest and at the same time ensures that others do not suffer.. Ensures protest, but not episodes and violence. Greece sighs in stadiums and democracy in rallies ", he said.

Mr.. In his speech yesterday, Chrysochoidis also provided specific data on the marches that took place in the center of Athens in May and June, of which, as he said, the need arises to regulate the issue.

"From May to June 2020 were made 119 outdoor gatherings. About two a day. The 87% of concentrations, almost the 9 at 10 they had less than 500 participants. Half, 5 at 10 they had less than 50 individuals. Almost all, 112 at 119 the road was closed, traffic was stopped. One is happy with this situation; For reasons of constitutional order, democratic legitimacy and principle comes the regulation. Refusal to regulate is an escape ".
SYRIZA keeps the high tones

For its part, SYRIZA maintains high tones and the rhetoric of the junta's demands for the withdrawal of the bill, and most of its MPs in their speeches assured that in case SYRIZA returns to power., the law will be repealed.

In fact, George Katrougalos in his statement implied that the law is not even going to be implemented. "The law will be implemented as much as the junta's legislative decree, that is, never and never. Demonstrations will take place without notification and without an organizer and will not be disbanded. When fascists provoke with rallies, society will react and counter-assemblies will take place. And of course, the next progressive government that will not be long in coming, will formally repeal this law that will never be enforced ".
Chrysochoidis attack in Ragousi: Think about who you are sitting with

Mr.. Chrysochoidis from all the attacks he received from SYRIZA, He wanted to respond in a personal tone only to Giannis Ragousis, with whom they had previously been together in the same cabinet under the PASOK government.

"My friend Giannis Ragousis told me that I am just sitting with people who have harmed Greece. Dude John, you think about who you are sitting with. Think carefully about who harmed Greece. Dude John, whose party holding the flag fostered polarization and division. This flag is still held by its leader today. I call this flag destructive, because it annulled an acquis of post-revolutionary democracy. The acquisition of us being political opponents, but not enemies. I remain immobile in this acquis and it is my compass. I am glad that I am contributing to the return of this compass. To reform without destroying. I am glad that Greece is breathing out today from the catastrophic division and polarization. ".
Gathering of ADEDY and PAME for the bill

However, apart from the charge that will be charged in the Parliament, the atmosphere will be charged and outside, as two rallies have been planned in the center of Athens., one from PAME in 8 at night in Syntagma and the second from ADEDY and SYRIZA in 7 in the afternoon in Klafthmonos Square.

Greece is growing: National Front 284 "YES" for the expansion of territorial waters in 12 nm. in the Ionian 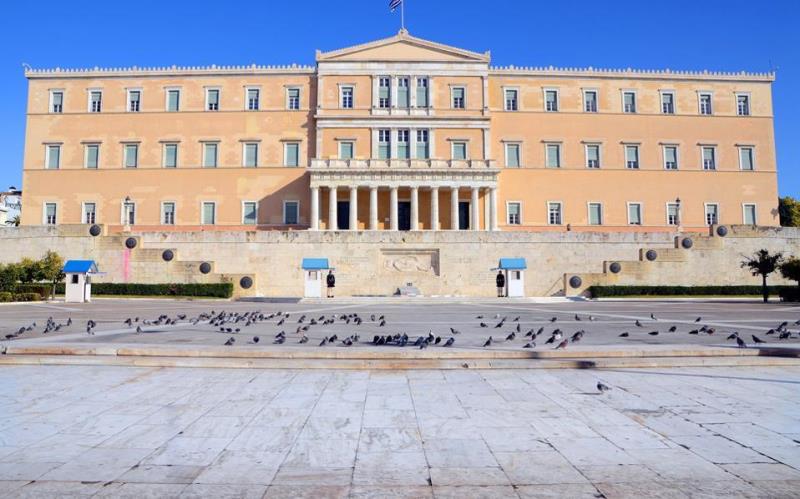