Georgiadis for retail: Measures are coming for small shops - Priority in clothing, footwear

Georgiadis for retail: Measures are coming for small shops - Priority in clothing, footwear

Assurances to traders that the government has a plan and will not let anyone get hurt were given today by the Minister of Development, Adonis Georgiades.

Mr.. Georgiadis, speaking on SKAI radio 100,3, stressed that it shares the concerns of traders as their activities are not open to discounts, however he explained that the government would correct it, while both he and the Prime Minister are following developments very closely and are discussing with the Infectious Diseases Committee.

Mr.. Georgiadis announced new measures for small stores in the coming days, saying that priority will be given to the clothing and footwear sectors, as they have suffered the most damage. He asked for time from the traders in order to develop the government plan.

THE,what we said will be paid, has been paid, The Minister noted that the owners who receive reduced rent will receive their money in the near future..

He stressed that public health measures have huge financial costs, however the government has complete control over the economy. "We will not meet even with memoranda, nor with bankruptcy. We will make our reforms, will become our vaccines, we will face the pandemic and we will go further ", said Mr. characteristically. Georgiadis.
Source: iefimerida.gr 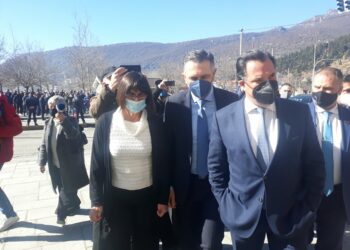 the Deputy Regional Governor of Kastoria submitted a detailed memorandum with data and proposals for the P.E.

The Minister of Development and Investment Adonis Georgiadis had a meeting with the Deputy Regional Governor of Kastoria Despina Kozatsani, who was found today Thursday ...

Georgiadis: December of 2023 The expansion of the natural gas network in Florina will be completed

His commitment that until his December 2023 the expansion project of the gas distribution network will be completed..

Georgiadis for price increases on the masks of increased protection: You will never see the fine that will come

About what will happen with the purchase and the measures, during the holidays, Minister of Development and Investment spoke today ...