George Amanatidis: He suffered a heart attack due to a sandwich

George Amanatidis: He suffered a heart attack due to a sandwich

New Democracy MP Giorgos Amanatidis suffered a heart attack due to a sandwich, as a result of which he underwent open heart surgery.

The MP spoke to OPEN about the adventure of his health.

As Mr. said. Amanatidis on Open TV, when he ate a sandwich, symptoms of poisoning occurred the same night, while he also did a test for coronavirus following the doctor's instruction because the symptoms were similar. "She was not covid. After, When I went to Kozani at the weekend a fever started in between 37,5 with 38. I started blood tests that showed evidence that was very strange. It meant that there was an inflammation. We tried with the tests to prove if it was salmonella or something else. I got to the point of begging to be one of them. The days passed, finally it was an enterococcus which through inflammation, from the poisoning through the intestine entered the blood and from there into the heart ", explained Mr.. Amanatidis.

"All this time I was trying to see what it was, there was probably a process of damage to the heart and when at the last minute the pulmonologist with “ordered” almost to go to Thessaloniki, the finding there was that it is endocarditis and not only that: has already caused significant damage to the aortic valve that needs to be replaced ", he noted, recounting his incredible adventure, which started with a sandwich.

As the doctors told him, this came from an infection that through the intestine and through the inflammation that developed, enterococcus through the blood went to the heart. "Unfortunately these were things I was hearing for the first time", he said. And so MP George Amanatidis arrived to undergo open heart surgery.

"I had open heart surgery, fortunately I achieved very good scientists, everything went well "he stressed and said that he intends to contact the store that got the sandwich" for human reasons, for the next ".

Mr.. Amanatidis has already returned to his parliamentary duties. "I also recognize in the problem its beauty because it was a condition for me to get well" he concluded.

Amanatidis: Establishment of a Mental Health Unit (Adult-Adolescents and Children Day Center) in the Municipality of Kozani

In my effort to strengthen the social structures of our Prefecture, and especially in Mental Health issues, I had conversations with ... 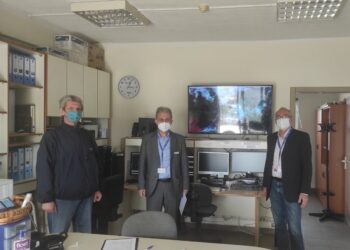 In order to protect agricultural production in N.. Kozani from hail, with prevention and immediate intervention by artificial means,...

Ο Γ. Amanatidis for the visit of the President of ELGA Andreas Lykourentzos to Western Macedonia

Amanatidis: The possibility of transferring the administrations of Kozani and Kastoria to the Region of Western Macedonia "unblocked"

With an Amendment submitted by the Minister of Finance Mr.. Staikouras Chr. and was discussed today in the Standing Committee on Economic Affairs in the context ...