George Amanatidis: "The Pentalofos Hospitality Structure will continue its operation"

George Amanatidis: "The Pentalofos Hospitality Structure will continue its operation"

On the initiative of MP N.. Kozanis George Amanatidis organized a working meeting in the office of the Secretary General of Immigration and Asylum Patroklos Georgiadis, with the participation of the Mayor of Voio, Christos Zevklis, of the Deputy Mayor of Voio George Mayaga and the General Director of Coordination and Management of Asylum Fund Programs, Immigration, Integration and Internal Security Fund and other resources Florence Vokotouzi.

The meeting took place following a previous initiative of the Member of Parliament (here) and its object were:

It is estimated that the funding will start at the end of Spring - beginning of Summer 2022. During the transitional period, the Secretary General will take care to ensure the financing of its operation..

Amanatidis: "Incentives and solutions from the Ministry of Finance" 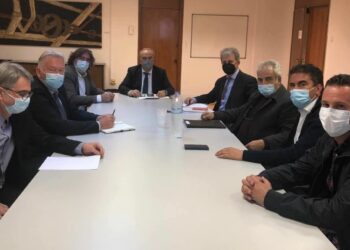 George Amanatidis: Utilization of natural gas for heating and other uses by residents of the Municipalities of Voio, Serbion and Velvento

Today 19/11/2021 The meeting in the office of the Deputy Minister of Development and Investment was completed with absolute success.. Papathanasis Nikou who ...

Amanatidis: Speech at the 11th Parliamentary Cooperation Meeting of European and Asian Parliaments

Amanatidis: The operation of the Pentalofos hospitality structure continues for the next five years