Gountios Giannis: If he did not go to IFTAR…

Gountios Giannis: If he did not go to IFTAR…

IF HE DIDN'T GO TO IFTAR…

Finally. During the visit of the Greek Foreign Minister to Turkey, the obvious was expressed for the first time. Turkish public opinion was formally addressed by a live broadcast as well as to the international community.

The Greek Foreign Minister in preparation, composure, self confidence, sobriety, clarity, methodical, steady voice and tone, smiling and confident he made most of it public (unfortunately not all) from Greek positions.

The style of the Turkish Foreign Minister, the spasms of his face, the utterance of his speech, his apparent surprise and anxiety to prove to the international audience Turkey's "compromising" position and its "democracy", they made him nervous and trapped in the Turkish choices themselves. Ίσως σε δεύτερο χρόνο ο ψυχρός Ερντογκάν τον αποπέμψει.

For the first time, Turkish public opinion is listening to Greek positions. Μπορεί πλέον να συγκρίνει. But also the international community, including Germany, can not be hidden. Greek positions have been publicly expressed and are well established in international law.

The diplomatic advantage will prove to be a content gap, unless enriched with a strong and intelligently renewed defense system, with geostrategic and politico-diplomatic moves. This is how you make an acquis.

To crystallize with diplomatic initiatives all Greek positions such as genocides, Ίμβρος - Τενεδος, Hagia Sophia, Copper, properties of Constantinople, 12 miles, Turkish-Libyan memorandum, Varosia etc. (mentioning some that were not heard) in international fora.

The general geopolitical situation from Ukraine to Libya and the Western Balkans (στα οποία μεθοδεύεται υπογείως η αλλαγή συνόρων και θα πρέπει η Ελλάδα να αρθρώσει στρατηγικό, coordinate, dynamic and demanding reason) to the Persian Gulf and the new US-Russian conflict, favors Greece as a force for stability in the region. At the same time on all hot fronts (Ukraine, Syria, Libya, Western Balkans, Armenia), Turkey has a destabilizing contribution.

In this context, this success should be used in the forthcoming Pentagon. Crans-Montana should be the starting point. At the same time, the occupying forces should be completely withdrawn and Cyprus should be freed from the commitment of the bi-communal-bi-zonal federation and any other form of federation.. The Republic of Cyprus is united, indivisible state entity in accordance with international law and the European acquis.

Ο έλληνας ΥΠΕΞ αν δεν πήγαινε στο ιφτάρ θα είχε επιτύχει ακόμη κάτι πολύ σημαντικό. He should not have accepted his counterpart's invitation to the Ottoman dinner, precisely because at the same time we are going through a period of fasting in view of the Orthodox Easter. Η στάση αυτή θα ανάγκαζε τον ΥΠΕΞ ενός θεοκρατικού Οθωμανικού καθεστώτος να αναγνωρίσει(;) diversity in religion. It would be extremely interesting to see the Turkish style in the context of man's freedom of religious choice. 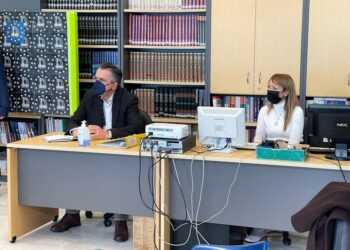 What happens with the availability, in welfare structures and hospitals, concerns our whole society, as a struggle of coexistence ....