At 25 October 2020 A seminar will be held by actors Maria Kechagioglou and Konstantinos Bibi and the director of the play Alexandros Raptotasios, in the theater.

The great work The facts of the internationally renowned Scottish playwright David Greig, to music and lyrics by John Brown, presented by the Alternative Stage of the National Opera in a big tour throughout Greece, in co-production with eight Municipal Regional Theaters.

The facts is a political project that examines the rise of the far right, of neo-fascism and xenophobia through an attempt to approach the "monster" itself. Amateur choirs from the cities where the show will be presented play a leading role in the play.. Inspired by the massacre 69 of men by Anders Breivik 2011 in Norway, the play attempts to understand the unthinkable and explore the limits of apology in the face of a atrocity.

The production is implemented with the support of the donation of the Stavros Niarchos Foundation (ISN) to the Alternative Tent.

The play The facts is presented for the second time in Greece, but for the first time on a tour around the country and with the participation of local choirs - according to the intention of the author and the other creators of the first show. Directed and translated by Alexandros Raptotasios, while music editing, the teaching of the choirs and the adaptation of the music and the lyrics are by Konstantinos Thomaidis.

The play was commissioned by the Actors Touring Company and premiered at the Traverse Theater in Edinburgh. (Fringe Festival 2013) directed by Ramin Gray. It received rave reviews and was described as important, pioneering work. Immediately after its premiere, a two-year tour of Great Britain followed, and then performed in theaters across Europe and in New York.

In the co-production of the Alternative Stage of ELS, the direction and translation are signed by the creative and restless Alexandros Raptotasios. He notes about the show:

«A real choir is on stage, unsuspecting of the content of the show that will follow. Everyday people, volunteers, citizens, retirees, a crowd that appears, sings and stays on stage, witness of the events. Opposite her the public, co-responsible, part of the "stage negotiation", almost like a chorus mirror. Between the two actors they try to find out what led a young man to kill an entire choir consisting of the "others". In front of our eyes they are attempting a public anatomy of the rise of the far right, in the patterns of ancient tragedy: two actors and the dance. Only here the dance is unsuspecting, part of the local community and changes every night. Local choirs from Athens, Piraeus, Ioannina, Larissa, Corfu, Crete, Serres, Kozani, Kalamata, Chania, Heraklion and Agrinio - cities that have recently received refugee populations - create a new dance every night. When I started this project two years ago with Konstantinos Thomaidis, I was convinced that in order for what we are going to make sense, choirs would have to be involved, agencies and the public of the region, how people who are directly involved in this issue should be involved, in their daily lives, people who may disagree with each other. As with my previous work, I'm interested in provoking a real encounter during the show, and that is why I am fascinated by this work that from the beginning makes every show - every night - different and unpredictable. I'm not interested in doing theater to say my opinion or to go out and just condemn or applaud something. We live in an age of extreme polarization, where we refuse to listen to different views and close ourselves in virtual realities that repeat the views with which we already agree. Many times the theater does the same thing. The issue for me is the recognition of the contradictions and issues that we face today as a society and the public dialogue that can be done on them through the theater.».

The set was edited by the Municipality of Klimenov in collaboration with the director within the measures imposed due to COVID-19 and its goal is to place the local choirs as a reflection of the public, while the actors run a fact-finding workshop, memories and ideologies between them. In the same axis, Eliza Alexandropoulou designed the lights, examining what unites us, that moves us from individuality to the whole. The costumes were edited by Maria-Cecil Inglesi.

Claire, a teacher who in her spare time conducts a local amateur choir consisting of immigrants and people from vulnerable social groups, believes that there is an explanation for everything,what is happening in the world. One day a young local man invades her rehearsal room armed and opens fire. Claire will be the only survivor and the only thing she wants to do is understand why.

Musical theater
David Greig
The facts
Co-production of the Alternative Stage of the National Opera with the DIPETHE of Corfu, Ioannina, Kozani, Serres, Of Crete, Kalamata, Agrinio, the Thessalian Theater and Ferodo Bridges

The planned performances of the project THE EVENTS, co-production of the Alternative Stage of the National Opera with the DIPETHE of Kozani, postponed .... 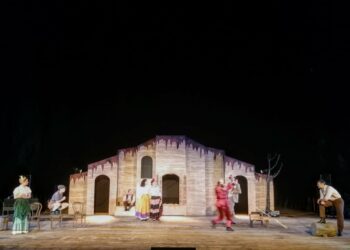 "Ah love!»: Fun for the mind and soul with the performance of DI.PE.THE. Kozani -25&26 July at the Open Air Municipal Theater

Despite the difficult situation, DI.PE.THE. Kozani managed to bring people's hearts together with the play "Ah love!»....

After the completion of the voting process for the selection of the Artistic Director of DI.PE.THE. Kozani for the period up to ...

Open letter to the Municipality. Kozani signed by 86 artists

To the President And the members of the Board of Directors of Di.Pe.The. Kozani Dear ladies, Dear gentlemen, For several months, from...