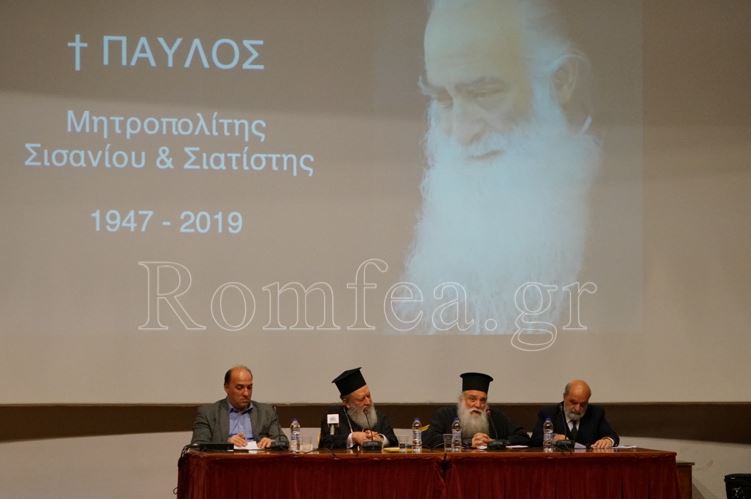 Event for the blessed Metropolitan of Siatista Mr. Pavlos at the Athens War Museum

Event for the blessed Metropolitan of Siatista Mr. Pavlos at the Athens War Museum

In a very moving event organized by En Plo Publications, on Thursday afternoon 27 February at the Amphitheater of the Athens War Museum, presented the work and personality of a modern intellectual form of our time, of the blessed Metropolitan of Sisani and Siatist Mr. Pavlos.

The event was honored by the presence of His Eminence the Metropolitans of Nea Smyrni and. Συμεών, Κορίνθου κ. Διονύσιος, Thermopylae Mr.. John and Spain and Portugal Mr. Polycarp, as well as crowds of people.

The presentation started with a video, in which the whole life of the blessed high priest unfolded from his early childhood years until his episcopal ministry.

This was followed by the greeting of Theophilestatos Bishop of Oreon Mr.. Philotheou, representative of His Beatitude the Archbishop of Athens and all of Greece Mr.. Jerome , Chief Secretary of the Holy Synod, who expressed his joy for this honorary event and praised the personality of Blessed Paul.

Subsequently, The floor was given by His Eminence the Metropolitan of Chalkis Mr.. Chrysostom, who emphasized the intelligible style of the honored Hierarch, sometimes stern and complaining, where circumstances required it, his concern and interest in the poor and the workers, his commitment to the issues of youth and its residence, but also the fact that he systematically made pastoral self-criticism.

He unfolded all the characteristics of his personality and the abundance of talents given to him by God., which he used to become a real shepherd and teacher.

Subsequently, Archimandrite Ephraim Triantaphyllopoulos spoke, Protosyggellos of I.. Of the Diocese of Sisani and Siatist and one of the closest associates of Blessed Paul, who told the audience details and snapshots of his life, which he had the blessing of living up close.

He emphasized his love for monasteries and monastic fraternities, the fact that he never criticized anyone, that he was completely unselfish and even strengthened many of his spiritual children, who were in financial need.

He added that Agios Iakovos Tsalikis had told him to beware of the temptation of popularity - because he was especially dear to the people. He fought to deconstruct the "religious" man and the ideologicalization of the spiritual life. He believed in true orthodoxy and orthodoxy and his theology was the result of life experience. End, stressed that he was a systematic minister and attached great importance to genuine worship.

The third presentation was made by the Emeritus Professor of the Aristotle University of Thessaloniki and Professor of the University of Nicosia and. Anesti Keselopoulos, who developed the theological aspects of the personality of the Blessed Hierarch and presented those elements, which highlight his commitment to the true theology of our Church. As he characteristically stressed, "all these were not just opinions and ideas, but a life experience resulting from his exhilarating sacrifice for others ".

The event was closed by the publisher of EN PLO publications Alexandros Karavanis, who after emphasizing the contribution of the Blessed High Priest in the first stages of the formation of the publishing house, praised his commitment to the Christian letters and the use of the word for the great encounter with the Word of life.

He announced, that the EN PLO publications will continue to use the material at their disposal and to give to the reading public the hoarded texts of this enlightened pastor of our Church.

On the occasion of the completion of two years since the sleep of the Blessed Metropolitan of Sisani and Siatist Paul, A memorial service was held today in ... 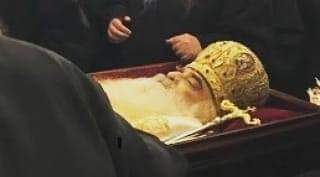 The moving poem about the Blessed Metropolitan Paul, by father Ephraim

The Protosyggelos of the Diocese of Sisani and Siatist Ephraim, on the occasion of the completion of two years since the sleep of the Blessed Metropolitan ... 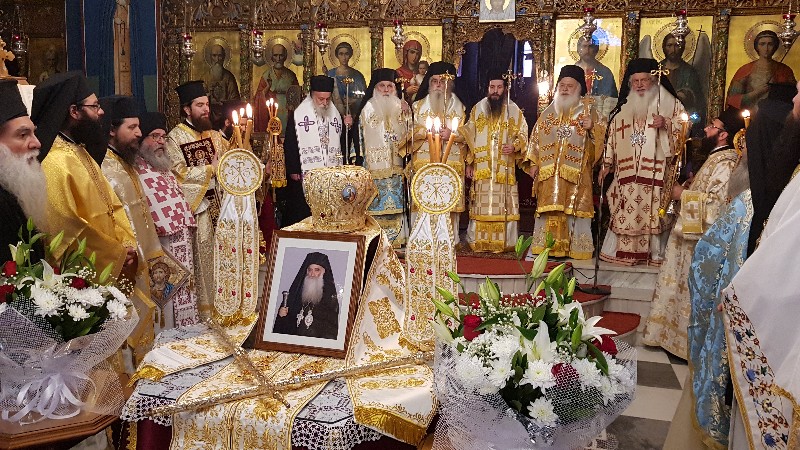 The annual memorial service of the Blessed Metropolitan of Sisani and Siatist Pavlos took place. Video

It took place on Sunday 12 January at the Metropolitan Church of Agios Dimitrios Siatista, the annual memorial service of the Blessed Metropolitan of Sisani and Siatist ...

The Holy Metropolis of Tamassos and Orini announces that, on the occasion of the completion of one year from the sleep of the vocalist ...