Panhellenic 2022: The new Computer Science and the new Departments for the candidates

Proper nutrition for people with diabetes

Antibody test: How much the patient has and how much the vaccinated person - What ultimately applies

There is also an identity check in the restaurants

Coronavirus vaccine: Which citizens will be affected by the third installment that will be announced on Monday

All that applies to the Repeat Panhellenic Games 2020

The Ministry of Education has issued a circular on how to conduct the Repetitive Panhellenic Games. 2020 and admission to higher education.

The Neolaia.gr presents to you in detail everything that the Circular of the Ministry of Education stipulates for the way of organization and conduct in Repetitive Panhellenic 2020.

1. Right to participate in the re-entrance exams in higher education and organization of procedures.

In September of each school year, repeat exams are held for admission to schools or Departments or introductory directions of Higher Education., in which the candidates for General are eligible to participate (daily or evening) and Professional (daily or evening) High school, provided that, either because of serious health reasons, either due to mental anguish resulting in the death of a blood relative of a relative in a straight line or a second degree of blood in a lateral line, which occurred within the month preceding the month of the commencement of the examinations and until the end thereof, did not take part or discontinued their examination in one or more courses during the regular examination period.

In the re-examinations, the candidates are compulsorily examined in all the courses in which they have already declared their participation with the application-statement that they submitted. (Orientation Group, General Education, Special Courses, Music Lessons (Musical Perception and Knowledge, Music Performance and Interpretation) Specialty Courses, practical tests) and not just anyone who was absent. By submitting the application for participation in the re-examinations, the candidate's participation in the regular examinations is canceled, as well as his grading and performance in courses and practical tests, in which it has already been considered, and the candidate is considered non-examined.

2. Supporting documents and deadline for submitting the application for participation in the re-examinations in the General and Vocational High Schools.

b) Documents of illness from a Private Hospital which bear the signature and seal of the treating physician and the Administrative Director of the private Clinic,

Sufficient simple medical certificates from private or responsible statements of students or their parents and guardians are not considered sufficient..

In case of absence during the Program of nationwide examinations of Special and Music Lessons, The deadline for submitting the relevant application and supporting documents is no later than two (2) days, of which at least the last working day from the day of the examination of the course in which the candidate was absent or interrupted his examination and are submitted to the EEDDE located in the Directorate of Secondary Education, to which the school to which they had submitted their initial application-statement for participation in the national exams belongs.

In case of absence during the Practical testing program, The deadline for submitting the relevant application and supporting documents is no later than two (2) days, of which at least the last working day from the day on which the candidate's participation in them was scheduled, if he was either absent or interrupted due to an accident or sudden illness and is submitted to the relevant EEDDE.

If during the examination due to sudden illness a candidate for GEL or EPAL, forced to discontinue his examination, the High School Committee or the Examination Committee on a case-by-case basis, after drawing up a relevant report, sends for safekeeping the written essay to the relevant EEDDE and a copy of the minutes to the Grading Center informing about its absence
candidate.

The candidate will take part in the re-examinations, if he submits a relevant application and the necessary supporting documents. Otherwise, the written essay is finally sent to the BK for grading with the relevant minutes of EEDDE.. If, of course, the candidate declares with a responsible statement that he has finally completed his examination, then his writing is sent and graded normally.

The Ε.Ε.Δ.Δ.Ε. formed in the local Directorates of Secondary Education according to the provisions of the article 24 of no. Φ.251 / 25089 / Α5 / 27-02-2020 (Government Gazette 643 Β΄) Decision of the Minister of Education and Religions, will have in their responsibilities the collection and control of applications and supporting documents of the candidates, who wish to participate in the re-examinations of both GEL and EPAL.

3. Submission of computer and determination of admission positions.

Candidates who are referred for re-examinations submit a computer with their preferences, together with the candidates (ΓΕ.Λ. and EPAL.) of the regular examination period, in accordance with the other provisions in force.

Candidates are admitted to the Schools or Departments or introductory directions of Higher Education in a percentage of positions in addition to the number of entrants of the regular examination period and specifically:

a) Candidates for General Lyceums are admitted to a percentage of positions 0,5% in addition to the number of entrants per Department in Higher Education Institutions (FOREVER.), in the Higher Ecclesiastical Academies and in the Higher Schools of Tourism Education and

b) Candidates for Vocational High Schools are admitted to a percentage of positions 0,5% in addition to the number of entrants per Department in Higher Education Institutions and Higher Schools of Tourism Education.

In any case, there must be at least one (1) position per Department.

Therefore, in accordance with applicable law, Candidates who take part in the re-examinations are not eligible for admission to Military or Police Schools or to Schools of the Fire Academy or to the Schools of Probationary Flagmen LS-EL.AKT. and Probationary Coast Guard or the Merchant Navy Academies.

Prerequisite for admission to a school or Department or admission direction is that the examinees in these repetitive examinations receive a score at least equal to that of the last successful in the national examinations of the regular examination period of the respective daily high school category. (ΓΕ.Λ., ΕΠΑ.Λ.) at that school, Department or Introductory Direction. 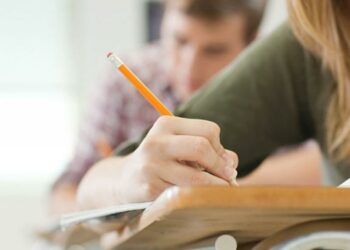 Panhellenic 2022: The new Computer Science and the new Departments for the candidates

The Bases have been announced 2021 opened results.it.minedu.gov.gr

Fundamentals 2021: 30 August is the most likely date for their announcement – The estimations

Thousands of candidates have entered the final straight for the announcement with the bases and the names of the successful candidates of the Panhellenic Examinations..

Panhellenic 2021: To 27 The successful candidates and the admission bases are announced in August

What measures will be taken this year for students, affected by the fires. Who is eligible for transfer for the academic year ...