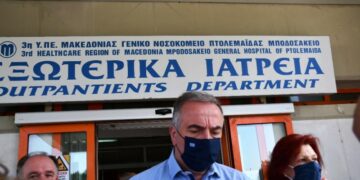 Calker: "Our gratitude to the doctors and nurses who were on the front lines of the undeclared war with the pandemic"

Calker: "Our gratitude to the doctors and nurses who were on the front lines of the undeclared war with the pandemic" 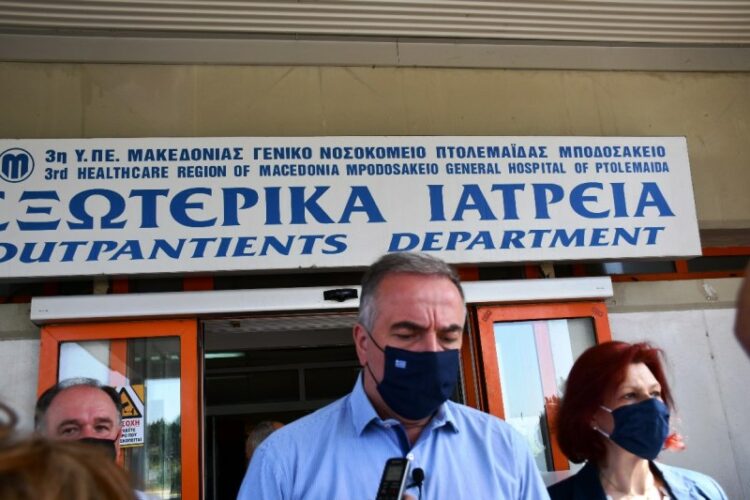 The Deputy Minister of Interior visited the General Hospital of Ptolemaida "Bodosakeio" this morning (Macedonia and Thrace) K. Stavros Kalafatis, during his two-day tour of Western Macedonia. He visited, also, at noon, the hospital of Kastoria.

«I visited the "Bodosakeio" hospital to take it to the doctors, nurses, the administration, τους υπαλλήλους, στους μαχητές που ήταν -και είναι- on the front line of the undeclared war with the pandemic, our gratitude. They overcame their endurance and saved our fellow citizens who were hit by the virus. We thank them and we are grateful to them ", dsaid Mr.. Kalafatis after his visit to "Bodosakeio". also, from the hospital of Kastoria, he stressed: "It is important for all of us to realize that the only safe antidote to the pandemic is vaccination and we must all fight to get as many of our fellow citizens vaccinated as possible.".

The Deputy Minister of Interior had a meeting with His Eminence the Metropolitan of Florina Prespa and Eordaia, Mr.. Theoklito, after which he stated: «It was a great blessing for me to meet His Excellency. The focus of our discussion was on damage repair projects in Holy Temples - symbols of Western Macedonia and the prospects for the development of church tourism. I thanked him above all for the Church's contribution to the defense against the virus.. And I asked him to help inform our fellow citizens - the young people who have more mobility, but also the older ones who are most at risk- for the need for vaccination ".

The Undersecretary of the Interior, he then visited the Border Station and the Victory Outpost, as well as the Customs Station and the Krystallopigi Outpost. In his statements regarding the entry controls of tourists from neighboring countries, he mentioned: "The anxiety that is expressed is completely understandable, but we must take careful steps. We have an enemy that does not stop mutating. Therefore, Our primary concern is public safety and the protection of the health of our fellow citizens. Opening borders is an equation that has many unknowns. We do not stop dealing with the issue every day so that there is the best possible solution ".

Από την Καστοριά ο κ. Kalafatis stressed that "it is important and encouraging in such a difficult period, like the one we spent the last year and a half to keep the investment spirit alive in Western Macedonia, in Macedonia and Thrace. It is indicative that in the program running in the Directorate of Private Investments of the Macedonia Sector – Thrace of the Ministry of Interior, there are essentially 17 proposals of companies which have submitted a specific plan and will be supported by 55 from. euro. This shows that the government and through the Macedonia-Thrace Sector of the Ministry of Interior, he is not going to leave anyone behind. The government of Kyriakos Mitsotakis will always be by the side of the citizens ".

In Kastoria, Mr.. Kalafatis had a meeting with the Board. of the Hellenic Fur Federation at the Exhibition Center of Western Macedonia.

He also visited, companies of Western Macedonia, which have been included in the financial programs managed by the Private Investment Directorate of the Macedonia - Thrace Sector of the Ministry of Interior, such as the Limneon Resort hotel facilities & Spa and a luxury resort in Kastoria of the company S.. SMAROPOULOS SA. Immediately after, was guided to the premises of the company MAVIZ SA. in Neapoli, Kozani, which has a dominant position in the market for the supply of food for fur animals, where an avant-garde operates, fully automated and efficient feed production unit.

Ptolemy: Less than twenty patients with covid-19 at Bodossakeio Hospital

Two discharges to people who were hospitalized with coronavirus were given in the last days at the Bodosakeio Hospital of Ptolemaida, reducing the number of ...

Ptolemaida Hospital Bodosakeio: new instructions concerning the attendance of patients and attendants at the hospital.

Bodosakeio Hospital: They are being treated 25 patients in covid-19 beds - 5 in the ICU

No particular changes, compared to the previous period, the image of the cases of coronavirus at the Bodosakeio Hospital of Ptolemaida, where on ...