Kalithea: He hit his wife with an ax – Injured and the perpetrator

Katerini: A coronavirus patient was found dead – He had it “burst” from the hospital

The ECNC for the Day of Persons with Disabilities

Kalithea: He hit his wife with an ax – Injured and the perpetrator

Thriller attacked a woman in Kallithea with an ax attack. He was chasing her on the street at 21.30 in Kallithea. A man chased a woman with an ax on Spartis Street and injured her in various parts of her body.

According to the first information from kallitheaonline.gr, the woman was attacked by her husband, who then injured himself with the same object.

The perpetrator was chasing her in the street holding an ax in the center of Kallithea. The man managed to hit the woman who was shouting with a ax, calling for help.

Bloody fell to the ground, while the perpetrator then turned the ax on himself and injured himself.

Residents of the area called the police who arrived to arrest the perpetrator. EKAB, some minutes later, received the woman who seemed to be conscious.

Both have been taken to hospital, while a preliminary investigation is being carried out by the local police department to determine the causes of the bloody incident.

According to the first information, they are an androgynous or apart couple. 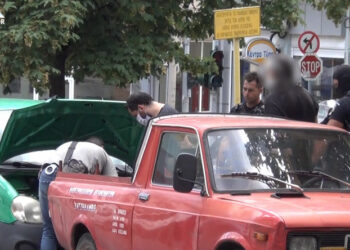 Video: The 45-year-old perpetrator accompanied by the Police

He was taken to the spot where his car was parked at noon on Thursday 16 July 2020 escorted by the Police Force, the 45-year-old ...