Bell from WHO: The Delta variant is a warning

Bell from WHO: The Delta variant is a warning

The Delta variant "is a warning that tells us that the virus is evolving, but it is also a call to action, to do something before more dangerous variations appear ", said Dr. Mike Ryan.

The hard-earned gains in the match against Covid-19 are lost, as the most contagious Delta variant spreads, but vaccines approved by the WHO remain effective against the disease, assured today the World Health Organization.

"WHO-approved vaccines all provide significant protection against serious illness and hospitalization", stressed Dr. Mike Ryan while briefing reporters. "We are fighting the same virus, but a virus that has become more capable ", he added.

The Delta variant "is a warning that tells us that the virus is evolving, but it is also a call to action, to do something before more dangerous variations appear ", Ryan added, who is the head of the WHO emergency response service. "The same measures we have used in the past will stop the virus. They stop the Delta variant, especially if we add the vaccination ", he insisted.

"Average, one person carrying this virus will infect more, unless we stop him, continuing to implement measures that restrict transmission, such as keeping distances, the use of a mask, hand hygiene, to make sure that we do not spend too much time in poorly ventilated areas with many people and to follow all the measures we have mentioned so many times ", he continued.

WHO Secretary General Tentros Antanom Gebregesus said that on average, in five of the six areas monitored by the Agency, infections increased by 80% in the last four weeks. In Africa the death toll also rose by 80% the same period.

According to the announcement of the National Organization of Public Health today, Saturday 18 September 2021, in Western Macedonia we had: 45 cases ... 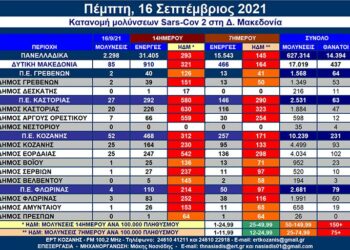 See in which Municipalities the cases of Thursday are distributed

The distribution of Thursday's cases 16 September, according to the tables ERT is as follows: They were located on Thursday ...

In an announcement issued by EODY, on Friday afternoon 17 September 2021, the following are reported: Her new laboratory confirmed cases ...