Nikos Androulakis will try to turn the "clear mandate" of the party members, who sealed with an unexpectedly mass turnout at the polls, into initiatives to constantly upgrade the role of PASOK / KINAL in the political scene..

THE "Pure command" described by approx 180 thousands of citizens who responded to the call of leadership, from the strong "yes" to the "return" to his eaves PASOK and the sun- gathered over 90% positive opinions- and from the mass participation in the project especially of the younger generations. An overwhelming victory also seems to be secured by its new leader Charilaou Trikoupi and in the field election of delegates to the Conference and the new leaderships of the organizations. The participation in Attica was sweeping, where in the last national elections the KINAL noted low single-digit flights, in Crete, where local actors remembered days… of December (with the first big victory of Mr.. Androulaki), in Achaia, where the presidential race with the Papandreou mobilized a lot of people, in Thessaly and other parts of the country with the many young and older candidates for the Congress and the party organs. The participation will be permanently locked tomorrow, after voting on the name, the delegates and the Prefectural Committees, the team of scientists and party trade unionists.

Yesterday's picture is for the leadership now "Passport" for large installments renewal of political potential, which he plans to develop from his next "station" Conference, at 20-22 May, in conjunction with all forces, generations and trends.

Close associates of Mr.. Androulaki admit that despite the optimistic indications they did not expect such a strong turnout at the polls- they even emphasize that for the same procedures of election of Delegates and bodies, in New Democracy, arrived recently approximately 130 thousands and in SYRIZA approximately 40 thousands. They estimate that the new vote of confidence of the people of the party in the new venture came to a large extent from the political dowry of the 270 thousands who voted last December for leadership, but also by other party friends who signed up to vote and support the effort to change political affiliations at the national polls, whenever they are set up. And they firmly believe that the "battle of the concrete" is yielding more and more fruits, the daily effort of PASOK to present concrete proposals for the major problems faced by Greek citizens. In the week, The former minister and head of the party's institute will present the program text for consultation until the Congress. Then there will be several regional conferences and according to the roadmap that is being drawn up, A Program Conference will be held in September, where will be presented in its entirety of the social democratic model of government.

Nikos Androulakis bets on the creation of another great political event on the occasion of the Party Congress in Tae Kwon Do, where he will describe the political "position" and the directions of the party in the face of the critical battles. Will respond to New Democracy and SYRIZA on government cooperation, will repeat that his own goal is the overthrow of the correlations and a social democratic government and that "neither Mr.. Mitsotakis, nor Mr.. Tsipras will see PASOK as prime minister again ". Charilaou Trikoupi executives claim that "the clear orders of the PASOK people need clear" lines "in front of the questions asked by the citizens". They point out that the party is not going to give in to the disorienting pressures of ND and SYRIZA and that PASOK will give a victorious battle "when Mr.. Mitsotakis decides to go to the polls ».

They characterize the presence and the speech at the Conference as crucial (on the second day) of the two former prime ministers, Costa Simitis and George Papandreou, as well as his former president PASOK, Evangelos Venizelos. THE Costas Simitis publicly supported the Androulakis project with his article in Nea, emphasizing his programmatic discourse, while George Papandreou who had late last night, According to reports, contact via phone with the party leader, considers a very positive development for the course of the party yesterday's mass participation in the polls- had agreed with Androulakis' decision on the two options on the ballot in relation to the name.

"Your shocking participation strengthened the hope that was born in him December. Thanks for the above 170 thousands of members, which gave a potential present, taking the future of the faction into their own hands. The citizens have decided: Our symbol, the sun, returned. Along with the memories of a historical faction, which was identified with the struggles of our people for democracy, social justice and national dignity. ", Nikos Androulakis stated last night, estimating that the conditions are created for the change of political correlations in the national elections. As he characteristically said from Charilaou Trikoupi, among his close associates and executives:

Your shocking participation strengthened the hope that was born in December. Thanks for the above 170 thousands of our members, which gave a potential present, taking the future of the faction into their own hands.
The citizens have decided: Our symbol, the sun, returned. pic.twitter.com/2v6ppHLH6n

"Expectations have returned that it will happen again Democratic Party, together with the forces of the Greek social democracy, of the renewal left and the ecology movements , the voice of creative Greece.

Of Greece progress, solidarity and development.

The voice of the Greeks, longing for a better future, seeking transparency and meritocracy.

The voice of the younger generations who are fighting for more opportunities in their lives.

We are building day by day a new relationship of trust with the Greek people in every field of the great challenges of our time..

We have crucial social and political battles ahead of us.

We move on with PASOK-Movement for Change.

Together we will succeed.

"Together we will win.".

Its General Manager PASOK / KINAL and his close associate, Nikos Salagiannis in a post on Facebook underlined from his side that: "Yes, is unexpected, this participation is amazing!

It is also deeply moving to see so many people endure and persevere in the queue for so long., to express their will .

It is also a deeply optimistic message, that we must assimilate and honor.

– We honor our history, we are proud of it and we remain faithful to our basic principles and values .

– We respect and honor the other competitors, that we have joined and coexisted in the last difficult years.

– We look ahead and claim, all together and decisively , today and tomorrow.

– We raise the Sun on our mast

We are back and we will star!».

THE Christos Polyzogopoulos, her close associate Fofis Gennimata who had openly disagreed with the "controversial decision" of the two name choices, also stated after the finale of the proceedings: "Deep and strong roots of our Party. With unity, respect for our base and strength, to continue for the authentic expression of society, in these difficult times. Well done, for mass participation in internal party elections». 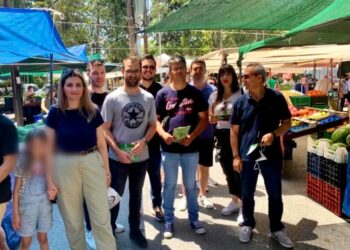 On Saturday 25-06-2022 PASOK-Movement for Change branch consisting of executives of the Political Council, of the Central Committee, of the Prefectural Committee of Kozani and ...

The catastrophic development of the White Dragon investment brings once again Western Macedonia to the zero point. The government...