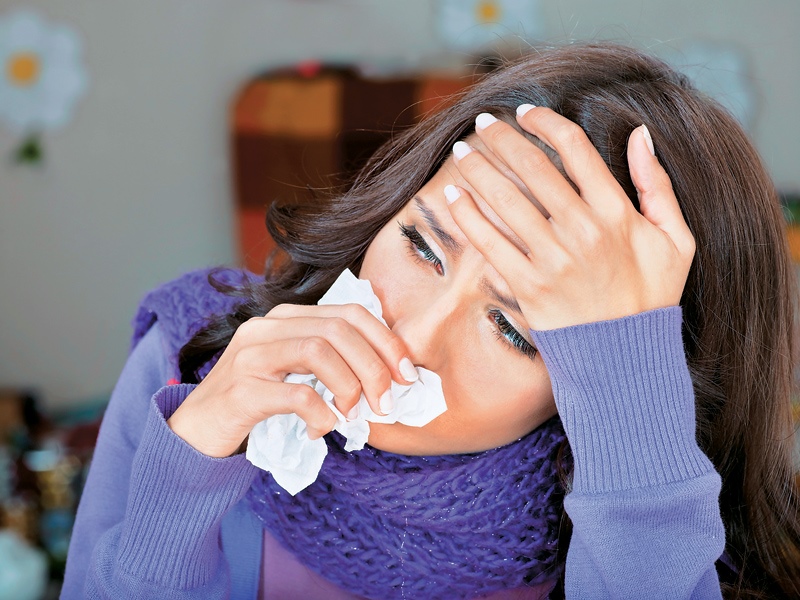 What infections threaten our health in the fall?

What infections threaten our health in the fall?

4 viral infections that appear in the fall and the symptoms with which they manifest.

The cold weather, strong winds and rains, suppress our immune system, making us vulnerable to infections. Anyone can be affected by seasonal weather changes, however, elderly, young children and people with weakened immune systems are at greater risk.

Here are the top four culprits that can affect your family's health during the fall, their symptoms and how to prevent them:

The flu season begins in early autumn, peaks around January or February and lasts until April or May. It is a viral infection, therefore does not respond to antibiotics, which only work with bacterial diseases.

A respiratory disease, it spreads easily from person to person and we can easily "pinch" it from infected surfaces.

The flu is most common with:

Diarrhea and vomiting can also accompany the flu, although this is more common in children than in adults. Anyone who has reduced immunity and shows flu symptoms should contact their doctor and if you have green or yellow mucus, severe headaches or difficulty breathing should contact the emergency department without delay.

Allergic asthma and rhinitis are especially common in the fall as mold spores accumulate on fallen leaves or in damp conditions at home.. Smoke from outdoor fires or barbecues can also cause symptoms, as it clogs the airways.

Allergic rhinitis can usually be treated with over-the-counter medications such as antihistamines.. In severe cases, however, further treatment may be needed.

Symptoms that need urgent treatment include::

Any of these symptoms may indicate serious developments that need urgent treatment.. Under normal conditions, the rescue inhaler will bring relief, but if the symptoms last for more than a few days (or your regular medications do not bring relief), you should consult your doctor.

Otitis is one of the main reasons parents take their children to the doctor, during autumn. Both bacteria and viruses can cause ear infections, which often bring severe pain to children. The reason that children develop ear infections more often than adults, is due to the smaller Eustachian tubes, in which fluids can be trapped and bacteria can grow.

If your child develops an ear infection, it may be best to resist treatment for a few days, για να δείτε εάν η λοίμωξη θεραπεύεται από μόνη της – ειδικά σε παιδιά 2 years and older. Antibiotics are often prescribed, but resistance is likely to arise, making the treatment less effective. Of course, if you are worried or the pain is intense, you should consult your doctor without delay.

Good hygiene, such as proper hand washing and thorough cleaning of the house for surface hygiene, can help prevent.

Bronchitis and bronchiolitis (RSV) in the case of babies and young children, are common during the fall and winter months. Typical symptoms include cough, difficulty breathing and wheezing and can last from a few days to several months.

Bronchitis occurs when the lining of the lungs becomes inflamed even if you are otherwise healthy, you will probably not need treatment. However, you should see a doctor if you feel very unwell.

Symptoms that need urgent treatment include::

Bronchiolitis is a similar condition that occurs in infants and young children and can get worse as the weather gets worse.. For most children, the symptoms are not severe and may include a runny nose, wheezing and coughing - similar to those with a severe cold.

The incident could, however, require urgent treatment if you notice a bluish tinge on the lips or skin, breathing become fast, hear a jerky sound in the chest or the patient has difficulty breathing, to eat or drink.

It is generally difficult to avoid the typical autumn diseases, but usually over-the-counter medications will help you get well. In case of emergency, however, it is best to get professional advice and appropriate treatment.

Florona: The first case of a pregnant woman in Israel – Combination of flu and coronavirus

According to sources in the Israeli Ministry of Health, it is a disease that combines the coronavirus strain and ...

Scientist warning: The flu will come back stronger this year due to the relaxation of the precautionary measures against the coronavirus

Strong recommendation to make the flu vaccine. Research data from the Mailman School of Public Health at Columbia University..

Many times a severe cold and a mild flu can occur with about the same clinical picture.. In ...

The distribution of influenza vaccines will be done only with an electronic prescription except in some special cases where a handwritten prescription will be made ....