A foreigner was arrested in Grevena, against which a decision of the Single Member Court of Appeal of Corfu was pending

We thank the Head of the Central Forensic Service who with excellent reflexes quickly denied this misery: Iris's thymus gland showed suffocation - Calls for deposits are coming

A fire is burning in a forest in an inaccessible area of ​​Mount Athos, great force of the Fire Brigade on the spot

Gasoline allowance: Who is entitled to the extra bonus of the fuel pass 15 euro

Subsidy for electrical appliances: The new clarifications send more beneficiaries for vouchers to the fund

The whole amendment: How much do the electricity bills "deflate" with the "freezing" of the adjustment clause?

The Ephorate of Antiquities of Kozani, in collaboration with the Municipality of Voio, the Municipality of Eordea and the Holy Diocese of Sisani and Siatist, participates again this year in the communication action "Green Cultural Routes", under the auspices of the Department of Educational Programs and Communication of the Archaeological Museums Directorate, Exhibitions and Educational Programs of the Ministry of Culture and Sports, with the organization action "Monuments Integrated in Nature, Monuments open to the public " που περιλαμβάνει σειρά επισκέψεων και ξεναγήσεων in two monuments of special archaeological importance of P.E.. Kozani: the Macedonian Tomb of Spilia Eordea and the Episcopal Basilica of Sisani Voio.

These two monuments, which are usually open only by prior arrangement, will remain open to the public in the presence of guards from 10:00 until 14:00 for the period from Thursday 26 until Sunday 29 May 2022.

In Macedonian Tomb of the Cave of Eordea, a monument to which entry is free of charge, will be guided tours of organized groups of students by an archaeologist of the Ephorate of Antiquities of Kozani, while at the same time a board will be placed with an informative text and photos of the tomb findings for the general public and individual visitors.

In Episcopal Basilica in Sisani, Voio, in which the entrance on Saturday 28 May 2022 and on Sunday 29 May 2022 will be done free of charge, will be guided tours of organized groups of students by an archaeologist of the Ephorate of Antiquities of Kozani, while leaflets for the specific monument will be distributed to individual visitors. At the same time, in collaboration with the Holy Diocese of Sisani and Siatist, visitors will be given the opportunity to be guided to post-Byzantine monastery of the Assumption of the Virgin, located next to the Episcopal Basilica.

The action is addressed to the general public as well as to primary and secondary school students.. Individual visitors can visit the monuments without prior arrangement, However, organized groups of visitors and schools are requested to contact the Ephorate of Antiquities of Kozani. (tel. 2461098800, inside. 3 and email [email protected]), in order to be informed of the available dates and times, to pre-register ensuring their participation in the tours. More details on the action, τα μνημεία και την ιστορία τους, as well as practical information for visitors and rich photographic material can be found on the website: https://prasinespolitistikesdiadromes2022.wordpress.com

Please note that Covid-19 will comply with the applicable safety measures during the tours..

THE Macedonian Tomb of the Cave of Eordea excavated the 1987. It is not covered with a mound, it is two-chambered, with a monumental facade of Doric style and a free pediment. The dead buried in him, numbering seven or eight, accompanied by bounties, which place its use in 2The-1The ai. e.g. This monument as well as the earliest different type of Macedonian tomb of the Eordea Towers, which was later excavated, confirms the common identity of burial customs and practices between Lower and Upper Macedonia. In addition, adds two more examples to the variety of architectural form, presenting the type of these monuments.

O mid-Byzantine church of Sisani, Kozani, is located a short distance west of the modern settlement of Sisani and is part of the series of large episcopal temples, built on the territory of Macedonia in the 11th c., such as the Old Metropolis of Veria, the Diocese of Serres, the basilica of the Serbs etc.. The church belongs to the type of three-aisled, most likely a domed basilica with bilateral violations, narthex and exonarthex. The typological and technical characteristics, the surviving painted decoration, the pottery and multicolored glazed tiles found during the excavation, date the church to the mid-Byzantine period and specifically to the 11th -12th c. It was probably destroyed by an earthquake in the first half of the 13th century at the latest, however, it is reconstructed and shaped into a cruciform inscribed. At the end of the 14th c., when the regions of Western Macedonia were conquered by the Ottomans, the operation of the temple ceased. The Byzantine name of the temple, remains unknown. However, the part of the founding composition on the western narrow side of the southern pillar of the Sanctuary, where the Virgin Mary is depicted with her kneeling, the owner-bishop proves that he was an episcopal and in fact dedicated to the Virgin Mary. Under the supervision of the Restoration Department of the Ministry of Culture, a shelter was constructed at the specific archaeological site., while the maintenance of the findings was completed (masonry, painted decoration) and the surrounding area was formed with the implementation body of the 11th EBA.

THE Holy Monastery of the Assumption of the Virgin Sisani, located next to the episcopal basilica, has been declared a historic monument. There is no exact information about the year of the foundation of the monastery, but it certainly worked 1797, chronology in which the Metropolitan of Sisani and Siatist Neophytos refers to the monastery in the list of villages under his jurisdiction. Η μονή είναι χτισμένη σε μια περιοχή με ιδιαίτερο αρχαιολογικό ενδιαφέρον, This fact is also confirmed by the use of marble sections from columns to support the Holy Table in the monastery's katholikon but also by the inscription of the 2nd AD.. on a marble slab that has been walled to the right of the main entrance of the temple. The katholikon of the monastery is a simple street building with a single gabled roof with the well-known in the east and west ends of the temples of the Ottoman Empire.. Of particular interest is the fresco of the temple, accompanied by a donor inscription in which the year of story is not visible, but also the excellent wooden iconostasis with its written decoration and images 1821, work of the well-known local painter Georgios Manuel from Selitsis (Εράτυρας).

Extension of the Photography Exhibition of Dimitris Vavliaras

The Ephorate of Antiquities of Kozani informs the interested public that it is extended until the end of 2022, due to increased interest, the exhibition...

The action "Monuments Integrated in Nature" was successfully completed, Monuments open to the public "

The action "Monuments Integrated in Nature" was successfully completed, Monuments open to the public "organized by the Ephorate of Antiquities of Kizani,... 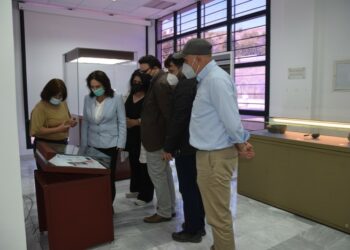 On Wednesday 18 May 2022 The periodical exhibition entitled "Copper and Lignite" was inaugurated at the Archaeological Museum of Aiani, with the... 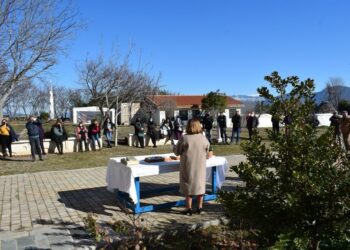 The staff of the Ephorate of Antiquities of Kozani cut yesterday, 20-1-2022, the New Year's pie, in the courtyard of the Archaeological Museum of Aiani, moving on ...