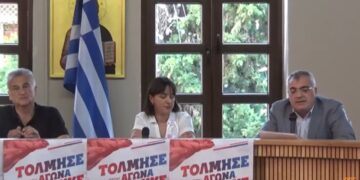 Siatista: The KKE event for Gouna was a success. Video

Siatista: The KKE event for Gouna was a success. Video 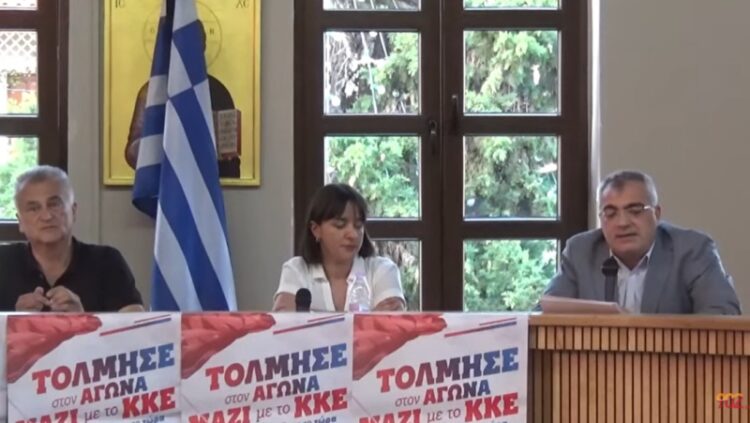 It was successfully held last Wednesday 29/6  inSiatista, its manifestationTE of Kastoria – Voio of the KKE with Title: "Developments in the fur sector and the Positions of the KKE".

Interventions followed byMichalis Karabatzias, member of TE Kastoria – Voiou of the KKE and fromSoula Kafasis, secretary of the Shiatistas Fur Workers' Union. At the end of the interventions, time was given for questions and discussion.

Through the event, the perennial interest in the workers and small professionals of the sector was highlighted and there was a broad call for cooperation with the KKE.

References from the speeches and interventions of the event are listed:

THE K. Papadakis in speaking among other things he emphasized: "Here in the region of Western Macedonia, the workers – popular strata live the results of this policy, finding that both internal politics and its external dimension affect them equally... depolitization, intensifying blows in the fur branch from “green” transition and sanctions against Russia".

For the anti-popular policy that they followed over time all governments stressed: "In Greece, the successive ND governments – PASOK and SYRIZA – ANEL together with “troika” (the institutions as the SYRIZA government called it to beautify the EU, her bank and the IMF) they imposed 3 memoranda of brutal anti-popular measures that wiped out the salary system, social and insurance rights of workers, led to the mass bankruptcy of the self-employed, under the burden of taxation, of the accumulation of debts in banks, insurance funds etc. The antagonists – these unpopular conditions were not reversed by the fact that, especially in the first years of the memorandums, growth was recorded in the fur industry. Barely, this one with the vehicle of EU and state subsidies proved that the money that flows into capital drags along and robs labor rights even though big business hoards and becomes powerful, first of all at the expense of its workers and with the conditions it imposes on the builders – artisans".

In in relation to the government's measures, he stated the following: "The triumphalism of the government and the fur industry for the removal of the luxury tax is about them and their contracts and not about the workers in the fur industry or the women who work in sewing fur at home, with informal work, without any work rights, gifts and allowances. They don't even concern the self-employed who see their income dramatically and continuously deteriorate and their debts grow after the pandemic, during which they received no support from the government".

In relation to the EU sanctions affecting the sector, he characteristically stated: "The extent of the blow to the sector is shown by the fact that furs have the second largest participation in the value of Greek exports to Russia with a percentage of 7%, while in total sales in Russia and Ukraine by the fur enterprises correspond to over 50% of total sales. That's why the people of D. of Macedonia and all our people, has yet another additional reason to be drawn up with the demand of the KKE to immediately stop Greece's military involvement in the imperialist war, to withdraw the country from the EU sanctions against Russia which the working people are paying dearly".

On the EU policy in the fur sector he emphasized, among other things: "On p’ this ground and for sharing the vast “pie” in the groups a fierce war of interests is unfolding between sections of capital, in business groups. For the fur industry, one side of this confrontation is also the one with the synthetic fur production industry. In the context of the strategy of the EU and governments to direct the various funds from the Development Fund, the “Cohesion Funds”, the NSRF and the CAP, the EIB and the European Bank for Reconstruction in “green” investments, fur is excluded from EU funding. also, a number of EU member states have banned or are about to ban the breeding of fur animals based on their designs and the economic priorities chosen by their bourgeois classes.

...This competition has neither environmental protection nor animals as its criterion, but shares of capital in conflict for control of the market and profitability with workers, the self-employed in the industry itself and overall to pay the bill".

THE Tina Kouziaki in her speech she characteristically mentioned the following: «To collapse various myths set up by the bourgeoisie, over time, governments claim that development can be neutral and for everyone, workers and employers, that the so-called “extroversion” of the economy and the sector is supposedly an advantage, reaching to this day that they say that tying Greece to the imperialist plans can supposedly have benefits for the Greek people".

He mentioned about the lives of workers sometimes in a period of crisis and sometimes in a period of growth: "The period of the first memorandums is very characteristic, that is, the period of deep economic capitalist crisis, where the industry was on an upward growth path. According to data from that time, the Greek fur industry in the 2012 – 2013 buy and modify it 7% of world production of furs and traded it 10% of the finished garment. We all understand what profits we are talking about. Did the employees see something positive?; At the moment when the big ones were hoarding, unemployment in the sector exceeded it 60%. Wages plummeted, flexible labor relations were generalized, insecure work increased, individual employment contracts prevailed, fixed working time was abolished. That is why we still appreciate today that the subsidy and support of the sector as announced by the government and local parliamentarians, without being combined with a hard fight on the part of the real needs of workers and small professionals, it will not automatically lead to an improvement in working conditions, to increase wages".

He addressed call for cooperation with the KKE everywhere: "We are calling you today, accompanying the KKE, to “let's burn” all the anti-people scenarios of the next day. Already, the next so-called saviors of the people have started preparing for post-election collaborations, to secure majorities to advance their anti-people work. Regardless of who will sit at the governing table, the menu is already ready. It addresses the chapter's strategic objectives one by one, which beyond their necessary differences, in the end everyone sends the bill to the people".

End, developed the Theses of the KKE: "Only the perspective provided by the KKE can utilize all the productive potential of your region. Social ownership is what is really new so that the economy ceases to function on the basis of profit. On this ground, the fur sector can also be exploited in an integrated organization of production in the wider textile sector, clothing, leather and other similar personal consumption products. Based on needs and capabilities and not profit, only in this way can it take all the protection measures for the natural and man-made environment.

It can organize a wide internal sales network that will meet the overall needs and potential of the economy, utilizing tourism for the benefit of the people and the workers. Alongside, can exploit international intra-imperialist antagonisms, to seek cooperation with states and peoples, which will ensure international agreements for the export of fur products".

THE Soula Kafasis addressed a broad rallying call to the Wool Workers' Union: “Huge sums were spent on public relations, reports, facilities, opening up to new markets but the daily wage in times of crisis and growth was firmly fixed. At such a level that the needs of life are not met. Among the biggest problems faced by fellow fur workers were occupational diseases. 8 with 10 hours of work in small workshops without ventilation especially in recent years, with the chemicals and toxins that were used to tan the hides, colorings and dyes, respiratory problems were reported, vision, skin diseases, increased incidence of cancer.

From data from the IKA of our region, especially for working fur workers and from information from our union it appears that until 2000 they got a pension 17 women fur workers. To this day, the number does not exceed 50 women….

THE Michalis Karabatzias he emphasized in his intervention: "We defend the industry from the side of the interests of the workers, of the working class, of the a/a and small furriers that have survived until now. But also of the industry, as a branch of production of products useful for popular needs not as a luxury item but as a clothing item, as an export product for the country's economy at the disposal of the people's power as a currency-earning industry that, as they once said, gave as much as the 15% of the shipping currency of the country.

In relation to the data they give today, they lie, they hide turnovers and of course profitability. In the form of discounts and the regime of active and passive refinement. Still say that during the period of development of the sector when they were talking about exports of height 500 million. euro, the actual annual turnover touched the 1.5 to 2 billion. euro. While, today the sector is in an absolute monopoly form controlled by MAVIZ, entire production in Greece, over 2 to 3 million. Skins. (…)

This is why we call for cooperation with the KKE. We call the workers, the self-employed to fight, for deeper changes at the level of economy and power. To socialize the means of production, central planning and social ownership'.

KKE: Event with theme, "Participation with the KKE is the only way out for the peasant farmer"

Event with theme: "Participation with the KKE is the only way out for the peasant farmer".

Sectoral Committee of Kastoria- Voio of the KKE: Condolence message

The Sectoral Committee of Kastoria- Voiou of the KKE is deeply saddened to say goodbye to his comrade Nikos Makris who so unjustly and unexpectedly left...

1 September in the park of Agios Dimitrios on 9:00pm

The new generation with the KKE for "the big, the beautiful, the shocking" (N. Belogiannis) - Socialism, the answer him...