Semen: Whether or not mRNA vaccines affect it;

Semen: Whether or not mRNA vaccines affect it;

The effect of mRNA technology vaccines on fertility is something that "brakes" many. Eventually, mRNA vaccines affect the sperm;

Because coronavirus SARS-CoV-2 infection has been associated with a reduction in sperm quality and quantity parameters, a relatively small study from the US investigated changes in these parameters before and after administration of an mRNA vaccine.

The Professors of the Therapeutic Clinic of the Medical School of the National and Kapodistrian University of Athens, Efstathios Kastritis and Thanos Dimopoulos (Rector of EKPA), summarize the data of this study.

What a new study showed

In this prospective study done at the University of Miami (published in the medical journal JAMA) healthy volunteers aged from 18 to 50 years, who had planned to be vaccinated with mRNA vaccine.

Participants were tested, to ensure that they did not have underlying fertility problems and those with COVID-19 symptoms or a positive test within 90 days were excluded from the study. Participants provided a sperm sample after 2 to 7 days of abstinence, before receiving the first dose of the vaccine and approximately 70 days after the second dose.

What happens in the second dose

Eight of them 45 men were oligospermic before the vaccine (median concentration, 8,5 millions / mL. From them, the 7 άνδρες είχαν αυξημένη συγκέντρωση σπέρματος σε φυσιολογικό εύρος μετά τη 2the dose (median sperm count 22 millions / mL) and 1 person remained oligospermic. None of the participants became azoospermic after the vaccine.

In essence, this study concludes that mRNA technology vaccines against COVID-19 do not affect any sperm health parameters.. also, because vaccines contain mRNA and not live virus, it is unlikely that the vaccine will affect sperm parameters.

Although the results showed statistically significant increases in all sperm parameters, the magnitude of this change is within the normal range. However, men with oligospermia showed no further reduction.

The main limitations of the study include the small number of men who joined the study, who were young and healthy men and relatively short follow-up (However, The study time frame includes the complete life cycle of the sperm, which is about 70-75 days).

And other interesting facts

The data from this study should, also, to be compared with other studies, who have examined the effect of COVID-19 infection on sperm production and quality. The ACE2 receptor, through which the SARS-CoV-2 virus enters the cells, using the spike protein, is abundant in the testicles, where spermatogenesis takes place.

Typically it is stated that the parameters of sperm quality seem to be adversely affected among male patients with confirmed COVID-19, compared to healthy controls, at least in the short term and are associated with significant disturbances in sperm volume, in concentration, in the number, in sperm motility and morphology, of sperm and the number of sperm.

On the possible long-term effects of COVID-19 infection on fertility, new scientific studies are imminent.

Overwhelmingly in favor of the vaccine for Covid-19 are the pediatricians playing a very important role in the operation of "persuasion" of teenagers from ... 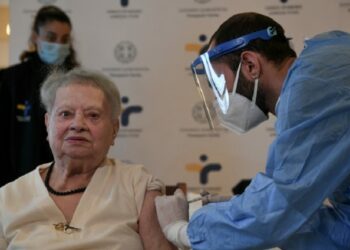 Door-to-door vaccinations: The first results of the expedition with mobile crews

About 100 unvaccinated "won" on its first day in Northern Greece επιχείρηση persuasion operation of the Ministry of Health, which...

Coronavirus: How much the antibodies increase with the third dose, what happens to the combination of vaccines

Carrying out the third dose with a different Covid-19 vaccine than,what the former is safe and effective, According to a...

Coronavirus: Six vaccination centers within the University of Western Macedonia

The University of Western Macedonia creates six vaccination centers within its facilities in collaboration with EODY. Although the ...