Stefanos Tsitsipas may have been ignorantly excluded from the recent US Open, however the cash prizes he has won this year - so far- is anything but negligible.

The Greek champion has won in 2021 height prizes 3,15 million. dollars and is in 4th place on the list.

It is located at the top Novak Djokovic with three Grand Slam titles this year and 7,44 million. dollars, followed by Daniel Medvedev, who launched his cash prize at 5,64 million. dollars with the conquest of the US Open, and Sasha Zverev with me 3,45 million. dollars. 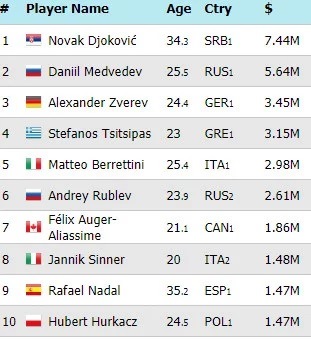 Stefanos Tsitsipas started his effort in the semifinal of Roland Garros in an amazing way. The Greek tennis player got the ...

Tsitsipas – Sakkari: In the semifinals of Roland Garros – When will the matches be broadcast?

Stefanos Tsitsipas and Maria Sakkari are in the semifinals (men and women, respectively) of Roland Garros and claim with many claims ...

Roland Garros: Tsitsipas against Djokovic for the… dream of the final