Event with theme, "The dialect of Eratyra: A Linguistic Analysis"

Municipality of Grevena: In Samarina the Mayor Giorgos Dastamanis about the custom of Tsiatsios – Video

Gamification has arrived in the healthcare sector

George Dastamanis: "The city of Greveni celebrates for Milto" – Congratulatory message from the Mayor of Grevena

Gold medal for the epic Miltos Tedoglou - "Fly" me 8.52, he made the best jump in the world for this year!

Kastoria: Display with creations of famous designers and graduates of fashion schools at the 47th Fur exhibition

He is in Athens today, Thursday and New Year's Eve, George Kasapidis, who, according to Kozanimedia, will have a private meeting with the Minister of Development and Trade Adonis Georgiadis.

In this important meeting, the governor of Western Macedonia (under the extremely unfavorable climate that has developed in the local community and in the business / professional world of the region after the last and, For many, unjustified new extension of harsh measures) is expected to seek immediate support from businesses in the region and especially in the Kozani Regional Unit which is still in total quarantine from the 16 October!

According to Kozanimedia, Today's "appointment" was requested by George Kasapidis, who, in fact, refused to hold a video conference, but a private meeting with the Minister of Development and Trade Adonis Georgiadis.

also,The governor of Western Macedonia is expected to meet with the Minister of Health Vassilis Kikilias. 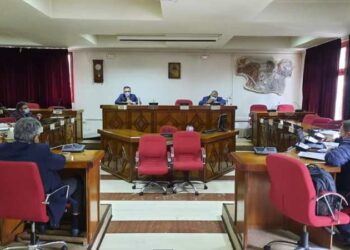 The need to accelerate the projects implemented by the Municipality of Eordea and DEYA Eordea, pointed out the Governor of the West ...

The Head of the "Hope" Association tries to hide the truth from the citizens with skill and ingenuity - Those who commit illegal acts against the farmers are brought to justice.

This is not the first time that the Head of the "Elpida" Association, Georgia Zempiliadou, "forgets" his actions and words ...

With the two-hour teleconference of the Regional Governor- Members of Parliament, The current marathon of processes ended in the aftermath of what emerged after the announcement of ...

It was completed shortly before 9 p.m.. the large extraordinary meeting convened by the Regional Governor of Western Macedonia, George Kasapidis, after ...