Συνάντηση του Πρόεδρου ΤΕΕ/ΤΔΜ, Nikolaou Sylliri, της Αντιπροέδρου του Τμήματος, Evangelia Bagavou and the Chairman of the Prefectural Committee of Kastoria, Dimitris Pappas, was held with the Mayor of Argos Orestiko, Mr. Panagiotis Kepaptsoglou and the Director of Technical Services of the Municipality, Mr. Vassilis Dislis, at the City Hall of Argos Orestiko, in order to discuss technical issues and the ways in which the Technical Chamber can assist in the rapid implementation of the projects of the Municipality.

The President of TEE / TDM informed the Mayor who also has the capacity of Vice President of PED Western Macedonia, for the tour of the new Administration so far, in the context of a wider planning and for the issues that dominate the agenda of the discussions with all the Municipalities, with the predominant one of the cooperation with the local offices and the Certified Engineers of the area, for the maturation of the projects and the support of the Municipalities.

The Mayor, an ardent supporter of the general cooperation with the scientific staff of the region and with the many years of experience he has, shared with the Bureau his experience in this matter and how MOD SA managed to manage, in the absence of the beneficiaries and the contracting authority, the money he has to support them, as a result, the majority of the assignments are directed to offices in Athens.

A discussion followed on the big problem of understaffing of the Municipalities and on their inability to recruit permanent staff, due to reduced regular aid, while also as Vice President of PED, noted that unfortunately the PED can not hire engineers to provide assistance to municipalities, although it has the financial capacity, because it is not provided by law in its responsibilities, while the role of ANKO SA as a new Development Organization was extensively discussed.

The Mayor informed the attendees about the technical program of the Municipality and about the approvals of the energy upgrades of the school units and the supplies of construction machinery that he has secured., while referring to the difficulty faced by the Municipalities in the maintenance of the forest roads and in the snowfall.

He referred to his intervention and the initiatives he has taken to create a Solid Waste Management Agency. (ΦΟΣΔΑ) in Western Macedonia from which free fertilizer can be produced for farmers, as well as in its attempt to establish a small Recyclable Materials Management Center (ΚΔΑΥ) which will have a dual role, so as to reduce the amount of waste that ends up in DIADYMA, that is, to reduce the expenses of the Municipality, as well as to manage biodegradable materials. End, has said it has been in favor of burning waste for energy for years, which was also a written proposal to the competent bodies.

In the context of the contacts of the Management of TEE / TDM, President Sylliris Nikolaos and members of the Steering Committee (Κιάνας Στέργιος, member... 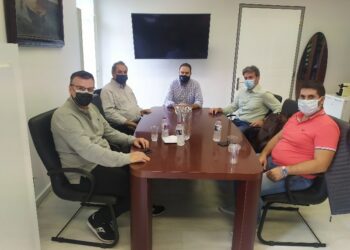 Meeting of the President of TEE / TDM Nikolaos Sylliris, of Gen.. Secretary Giannis Tziolas and the member of the Board. Μιχάλη Παπαγιαννάκη καθώς...