SYRIZA: Free passage at the new tolls of Siatista for the residents of the Municipality of Voio

SYRIZA: Free passage at the new tolls of Siatista for the residents of the Municipality of Voio

"Parliamentary question of the SYRIZA-PS MPs. Π.Ε. Kozani Mr.. Kalliopis Vetta and P.E.. Kastorias Mr.. Olympias Teligioridou for the exemption of the residents of the Municipality of Voio from the obligation to pay fees at the new tolls in Siatista ".

The SYRIZA MPs – Π.Σ Π.Ε. Kozani Mr.. Kalliopi Vetta and P.E.. Kastorias Mr.. Olympia Teligioridou submitted a parliamentary question to the Minister of Infrastructure and Transport on "Free passage at the new tolls of Siatista for the residents of the Municipality of Voi".

In the question, which is co-signed by the competent Head of Infrastructure and Transport of SYRIZA and. Nikos Pappas, reference is made to the Official Gazette – 137/Β / 19-1-2021 which defines the conditions for the start of operation of the toll stations in Siatista as well as the obligation to pay a toll.

Subsequently, reference is made to the reasonable reactions of the institutional and productive bodies of the region, as well as with the operation of tolls, The residents, even for short distances they pay full price, at a time when, due to the violent de-ligation and the dramatic shrinkage of the fur farming and production sector, the financial situation is extremely difficult.

Alongside, It is pointed out that there is a legal and political precedent with the decision of the SYRIZA government (Government Gazette – 4156/Β / 29-11-2017) which determined that the inhabitants of the areas adjacent to the Egnatia Odos, exempt from the obligation to pay tolls.

End, the following questions are asked to the Minister of Infrastructure:

The question is attached.

Member of Parliament for Kastoria, THE. Teligioridou

To the Minister of Infrastructure and Transport

Theme: «Free passage at the new tolls of Siatista for the residents of the Municipality of Voio».

By Joint Ministerial Decision 70/2021 – Government Gazette 137 / Β / 19-1-2021: "Commissioning and determination of toll fees of the Side Toll Stations of Anat. Siatistas, Polykastro, Asprovalta and the Siatista and Ardani Front Stations of the Egnatia Odos "the conditions were set for the start of operation and the charging of the passing vehicles from the toll stations in Siatista.

The charge has already started while the transit fees, depending on the vehicle type, range from 1.10 -5.30 euros for the front station while, for the lateral, from 0.50-2.50 euro.

The result of the Ministerial decision is that the residents of the Municipality of Voio to come, for example, at the administrative center of the Regional Unit, Kozani, for a distance just 15-20 kilometers, are obliged to pay tolls or use the old road network, which is in poor condition, with the risk of an increase in accidents due to this option to avoid charging.

also, on Thursday 28 In January, the Regional Union of Municipalities of Western Macedonia in a unanimous resolution was drafted at the request of residents and institutions for the non-charging of tolls.

We were informed, not, that in a meeting organized at the Ministry of Infrastructure and Transport on the specific issue, με αντιπροσωπεία της Δημοτικής Αρχής και Βουλευτών της συμπολίτευσης, it was not possible to contact the competent Minister, instead the ladder was referred to the Secretary General of the Ministry, without anything positive emerging from the meeting.

The request for a toll exemption has been granted in the past for a number of social and economic reasons.. particularly, with the Ministerial Decision No.. ΔΝΣ / οικ.84646 / ΦΝ 393/2017 – Government Gazette 4156 / Β / 29-11-2017:"Determination of exemptions from the payment of tolls at the Toll Stations of Egnatia Odos and its vertical axes, for residents of neighboring areas and the unemployed, in accordance with subsection (c) of the paragraph 9 of article two n. 4388/2016 (Α΄93)», SYRIZA government proceeds with this measure for a number of areas of Eastern and Western Macedonia, of Epirus and Thrace.

With the same decision, the unemployed were released from the obligation to pay tolls on the Egnatia Odos and its vertical axes..

The SYRIZA government realizes the need of the specific areas for safe and easy movements, without the financial burden of collecting tolls for passers-by, implemented this measure relieving the residents of neighboring municipalities.

Η περιοχή της Δυτικής Μακεδονίας βιώνει τις δραματικές συνέπειες της βίαιης απολιγνιτοποίησης ενώ, particularly, in the Municipality of Voi add the consequences of the shrinking of the fur breeding and production sector. As a consequence, Unemployment in the region is at extremely high levels while, in general, the Municipality of Voi notes the worst performance in Europe in a series of economic and social indicators.

Because the safety of the inhabitants is a supreme constitutional right,

Because the state, the 2017, Recognizes the Right to Easy and Free Movement for Residents of the Areas Adjacent to the Egnatia Odos,

The competent Minister is asked: 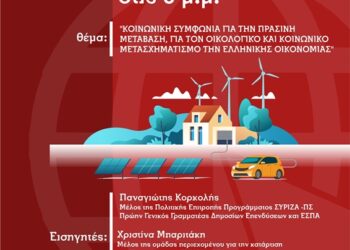 An online event will be held in Kozani on Thursday 10/6 on the subject: "SOCIAL AGREEMENT ON GREEN TRANSITION, FOR THE ECOLOGICAL ... 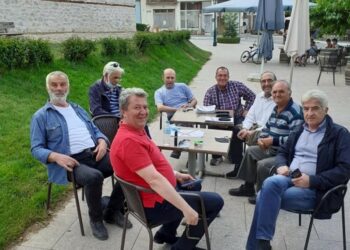 Group of SYRIZA executives - Progressive Alliance in Kozani and Siatista

Visit to the public market of Kozani and Siatista, performed today by members and executives of SYRIZA, handing out brochures and ...

"The Ministry of Development will not increase the available money of the operational programs for Western Macedonia – Answer to the parliamentary question of the SYRIZA-PS MPs. Western Macedonia for business support "

An online event is organized by N.E.. Kozani of SYRIZA - Progressive Alliance on Sunday 12 at noon Her attack ...