Position of the Member of Parliament P.E.. Kozani Stathis Konstantinidis for the vote of the extension of the territorial waters in the Ionian in 12 nautical miles

Position of the Member of Parliament P.E.. Kozani Stathis Konstantinidis for the vote of the extension of the territorial waters in the Ionian in 12 nautical miles

a. The expansion of our territorial waters in 12 nautical miles in the Ionian

With the roll-call vote taking place today, Greece is growing. By defining the seasickness zone in 12 nautical miles, in the Ionian Sea region up to Cape Tainaro in the Peloponnese, The Hellenic Republic is exercising its relevant right for the first time, as provided by the Law of the Sea.

It took a quarter of a century, from ratification by law 2321/1995 - Government Gazette 136 / Α / 23-6-1995 of the United Nations Convention from our country, for the expansion of our spatial sea to its maximum range.

This decision of the government of Kyriakos Mitsotakis is essentially an extension of our territory and sovereignty in airspace, sea, seabed and subsoil. Γι’ αυτό και απαιτήθηκε η ικανοποίηση του άρθρου 27 of the Constitution, στο πεδίο που προσδιόρισε προηγουμένως το Προεδρικό Διάταγμα 107/2020.

The definition, at any time, of the coastal zone in 12 nautical miles is our inalienable right and we will exercise it in other sea areas in the near future.

b. Our attitude towards Turkey and international alliances

Undoubtedly, the activation of the above right by our country, as well as the agreement with Egypt, are a decisive response to Turkey's illegal aspirations in the wider region.

Most likely, Ankara considered the environment shaped by the US elections, Brexit, immigration pressure and its cooperation with Russia, offered to create new data, By all means.

Greece was not surprised. The government had a plan and implemented it from the beginning. It presented itself in time as America's "predictable" partner and as a factor of stability in the Mediterranean. Reaffirms traditional alliances and strengthens relations with interested states. It highlighted points of mutual interest and convinced other forces in the region of common interests. He proved it to European leaders, in Evros, the destabilizing role of Turkey. Formed clear relationships, on clear positions.

Recently, Turkey has escalated the controversy dangerously, going through the "graying" design, in revisionism and in direct questioning of international treaties.

On the other, our country remained faithful to the invocation of International Law and avoided involvement, to which Turkey was persistently trying to lure her. Alongside, Nevertheless, απέτρεψε τη δημιουργία τετελεσμένων και προέβη σε ενέργειες για την κατοχύρωση εθνικών δικαιωμάτων, in which we had shown many years of inactivity, and the denunciation of illegal actions of the neighbor.

In addition, the Greek government strengthened the deterrent force of the country, by implementing a strong armaments program. So that, in case of escalation, to have strengthened our arsenal, while in case of de-escalation, not to have allowed point white victories for Turkey.

Mediator of intensity, Greece demands from Europe to accompany the condemnation of Turkish delinquency with the taking of immediate and drastic economic measures.

Adherently, in fact, our country has shown that the threat to it, poses a threat to Europe's borders and that a policy of appeasement discourages the other side.

Anyway, the Greek request had no punitive meaning. We called for sanctions as a clear defense of the international legal order and as a means of deterrence. Again, Nevertheless, Europe has shown its well-known indecision.

Is, in each case, clear, that the complete marginalization of Turkey does not serve stability in the region. The neighboring country is plagued by serious internal problems and political instability. Europe's goal must remain to upgrade relations with Turkey, subject to respect for the European acquis. I wish, and its European perspective, Nevertheless, this seems utopian in the current circumstances. Most likely, in fact, is that until the deep state of Ankara consciously decides to move to the European model, sanctions will emerge as the most painless option for its political leadership.

Until then, Greece is on alert and vigilant. He approaches the exploratory contacts unprejudiced but not unsuspectingly. We want dialogue because we want peaceful coexistence and legitimacy and we have confidence in the validity of our positions.

e. The unanimous vote of the Bill is a proof of unity

Today, with the unanimous vote of the bill for the extension of our territorial waters to 12 nautical miles, we send a message of national unity and solidarity. A message of determination to exercise and defend our sovereign rights. Message of faith and optimism that the 2021 will prove to be a year of national uplift and progress for our country.

It's for me, as for every colleague - I'm sure-, the highest price is the vote to extend the borders of the homeland!

Presentation by Stathis Konstantinidis in the Plenary Session of the Parliament: "Modernization, simplification and reform of the regulatory framework for public procurement, more specific procurement arrangements in the fields of defense and security and other provisions for development and infrastructure " 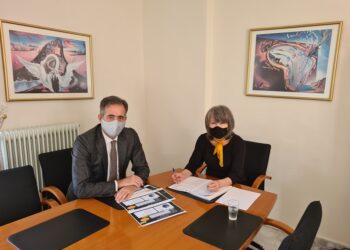 "During my visit to ANKO, I had the opportunity to talk to the new CEO, Ms. Elena Namini, ζητήματα σχετικά...