Syndicate of Builders and Related Professions Participates in Protest Protest Rally on Saturday 13 March in 12:00.

The roller coaster of the so-called "fair" development transition of the lignite areas parades and justly causes insecurity and concern to the majority of the people of Western Macedonia.

They could reasonably, the following questions may arise:

Who does not want a cleaner environment, with the cessation of "polluting chimneys"; Who does not want the dangerous jobs of PPC to be replaced with more (according to the government),more "clean" and "harmless"; What's wrong with private business plans?, create jobs at the bottom – down we will give the money, the EU will give them;.

Based on the elements of the "MasterPlan" project, The initial estimate for its funding is as follows: 10% subsidies, through the utilization of the first pillar of the Mechanism (Fair Transition Fund, EU), 30% loans on favorable terms, 40% commercial loans, through raising funding from domestic and international financial institutions and 20% equity by potential investors. Apart from these, the plan also includes a special tax zone, tax exemptions and tax breaks, fee exemption, insurance contribution subsidy, loans on favorable terms and guarantees from the state. In short, the money of the peoples of Europe and the Greek people will be handed over to the monopolies to make investments that will bring them additional profits..

So it is obvious who will give the money and who will eventually create the jobs. Not all of the above are enough though, the governments of all previous years and the current one, have taken care through various bills to further ensure the profitability of "investors", will have employees without collective bargaining agreements, with starvation wages, with schedule "whatever sits", with unpaid overtime they will get "someday", in breaks and from type stability, you go - you come.

As for how much most capitalists value the environment, working conditions, and generally all other than their profitability, seen from the last year of the pandemic that left the workplaces unsecured, especially hospitals without additional recruitment, construction sites without additional safety and hygiene measures. Environmental protection is violated by uncontrolled land concessions- forests for the installation of RES and other aspirations for hazardous waste management in our area.

Employees have nothing better to expect from the implementation of the "Master Plan" because it was written by those who aim to turn the area into a field of profitable investments by imposing a working middle age.. Only our coordinated mass struggle, through our unions can overturn employer-government plans.

By participating in the mobilization we fight for:

We are fighting for: 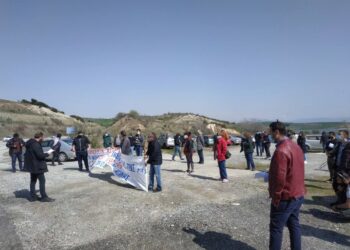 Builders union: Concentration against the creation of an Asbestos Landfill

It took place under special conditions, on Sunday 4 April at the Rymni Bridge the rally against the creation of an Asbestos Landfill ...

No to the creation of an Asbestos Landfill in the Zidani area, no one is playing with our lives and the lives of our families

The Board of Directors of the Union of Builders and Related Professions, feeling the concern of the employees and the young people of our area ...

Builders Union: “No to the creation of an Asbestos Landfill in the Zidani area”

The workers and the people of Aiani, of Cambodians and Serbs for years now have paid for the effects of the operation ...

Support and solidarity of the Builders Union to the new generation that keeps the schools of the struggle alive. For the student mobilizations ...