Greek priest: "Glory to you, the god that Hagia Sophia became a mosque!» (video)

An 85-year-old farmer in Deskati ended his life. He was found hanged in his house

Greek priest: "Glory to you, the god that Hagia Sophia became a mosque!» (video)

The statements were made about a week ago and of course the Turks isolated excerpts from his speech where he appears to say that the conversion of the Temple into a mosque can be interpreted in a sense as a correction and not a curse..

"Where the Turks were, it was much better, shame on us but she is, the Turk did not close any monastery in Crete, while in Greece by decree of Otto closed infinite monasteries and churches and threw away the relics of the Saints and took the silver and made them a salary for the state, at the same time the people who were under the Turks did their procedures, that is why Mr. Arveler used to say a thousand times to the Turk the sari in the City rather than to see a tiara, it is better not to see anyone but if it is better to choose the Turk than the Frank ", stressed the priest. 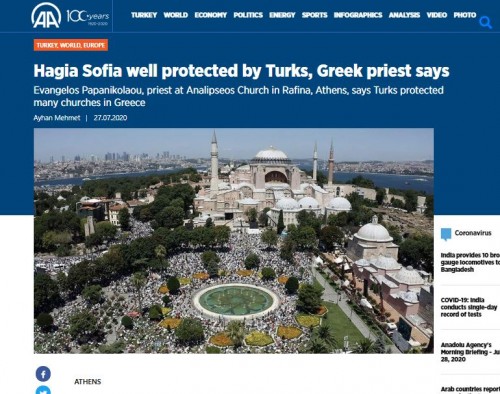 "Praise be to God who made it a mosque. You do not tell me you know how many naked and naked in the 24 hours entered the Hagia Sophia; Infinite. With the asshole entering the spot. I lie; Because they had a museum. All the useless people came in, stinking and trisalts, all tourists from all over the world without respecting anything. They did not respect anything. Now you will take off your shoes to get inside. You will enter naked ; No. They will wear your Turkish clothes and you will come in nicely dressed, Hanoumaki. You will also wear the burga to enter. You did not like to enter with clothes, but you were naked ".

In another point that is not broadcast by the Turkish media, he states "In order for the Antichrist to come, the Temple of Solomon must first be built in Jerusalem; Yes, the Temple of Solomon must have been built. What will Israel say now?; "O Muslims, you are a temple that was a museum (the Hagia Sophia)you made him a mosque. Us this glass you have (means the mosque of Omar) is built on the Temple of Solomon. So you will tear it down, for us to make our Temple. After you say that you are conquerors and do what you want with Hagia Sophia, and we are conquerors of Jerusalem and have the right to apply the law of the conqueror. And preparations will begin for the construction of the Temple of Solomon. Did you think that too? ; Things are deep. Not everything can be as simple as it seems to you. We silence. Did the Church declare a fast that will become the Hagia Sophia mosque; Did he declare vigilance, prayer; Nothing. Some small talk and other words to love ".

See everything the priest said

Letter from the Archbishop of America of Hope to the UN: Make Turkey accountable for turning Hagia Sophia into a mosque

Kappa Research: What do Greeks and Turks believe about the conversion of Hagia Sophia into a mosque?