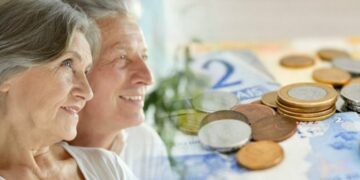 Retrospectively until 8.500 Hundreds of thousands of retirees are expected to receive euros in November and December. The new batch of retrospectives concerns the 11 months of June 2015-May 2016 for amounts as well 5.880 euros if they do not have auxiliary, as 7.228 euros if they have supplementary and in cases of double main pensions, with retrospectively over and over 8.500 euro.

Whether or not they have auxiliary, as reported by the newspaper "Eleftheros Typos", παίζει ρόλο στις κρατήσεις του νόμου 4093, calculated not only on a main pension but on the sum of pensions. The larger the sum, the larger the "scissors". These reductions (law 4093 and law 4051) were returned as unconstitutional in October, but many retirees either did not get all the refunds or got less than they lost. Now comes a new batch with a retro supplement.

These are retirees who when they retired received temporary pensions and did not have the reductions deemed unconstitutional for the 11 months of June 2015-May 2016, while when they were awarded the final pension their reductions were imposed and deducted from the retrospectives of their final pensions.

In this category are those who left as 2014, but also during the 11 months in question, and to which they are due retroactively from the unconstitutional reductions, which will be received in November by e-EFKA.

In the same category are those who received a supplementary pension with the beginning of payment in the disputed 11 months and in whom despite the deductions of the law 4093 increased due to a higher sum of pensions (from main and auxiliary), however, the retroactive payments returned to them in October were lower than expected because the increased deductions imposed on them were not calculated based on the sum of the main and auxiliary pensions., but only those who had in the main pension.

For example, and according to the data available in the insert "Insurance and Pensions":

Caution: The calculations for the incomplete retrospectives are continuous, which means that payments for retroactive balances from the 11 months of June 2015-May 2016 will take place in the coming months.

Another basic category that will be retroactively applied upon is the heirs 172.222 deceased retirees (see. p. 4-5). They will receive the retrospectives from the reductions that the pensioners had in the 11 months of June 2015-May 2016, after first submitting "identity" applications as real heirs of the deceased's pension. Applications will be submitted electronically to e-EFKA on the special platform that opens today or tomorrow and will remain open until 10 December or more if it is deemed that an extension should be given. 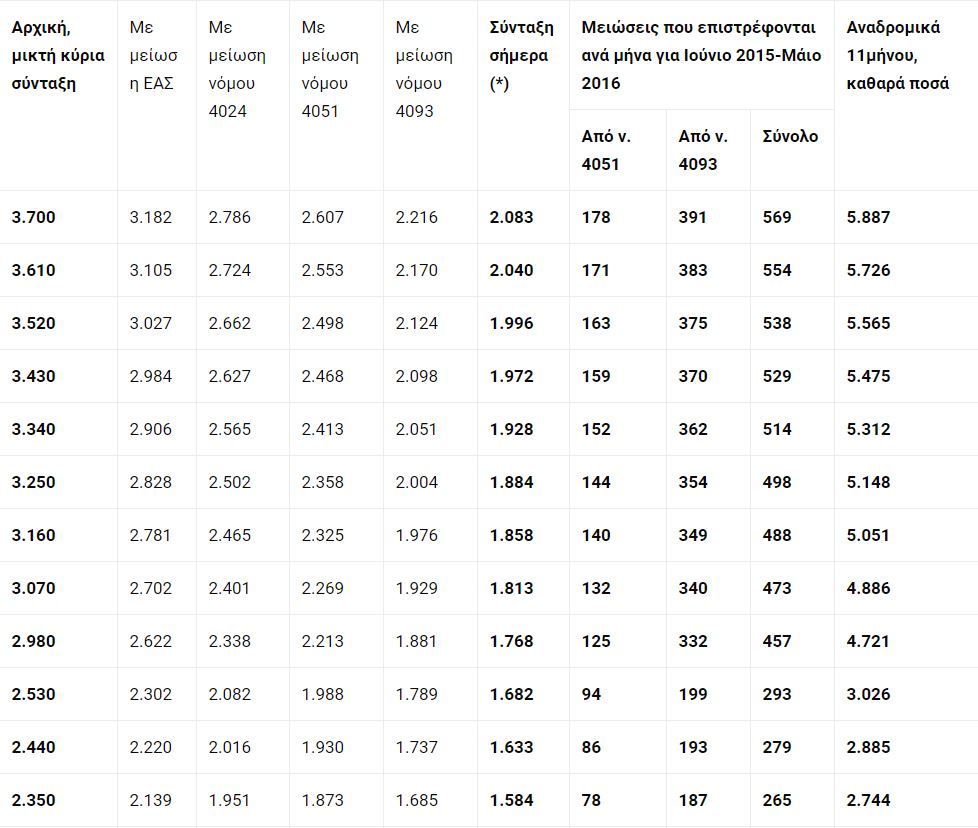 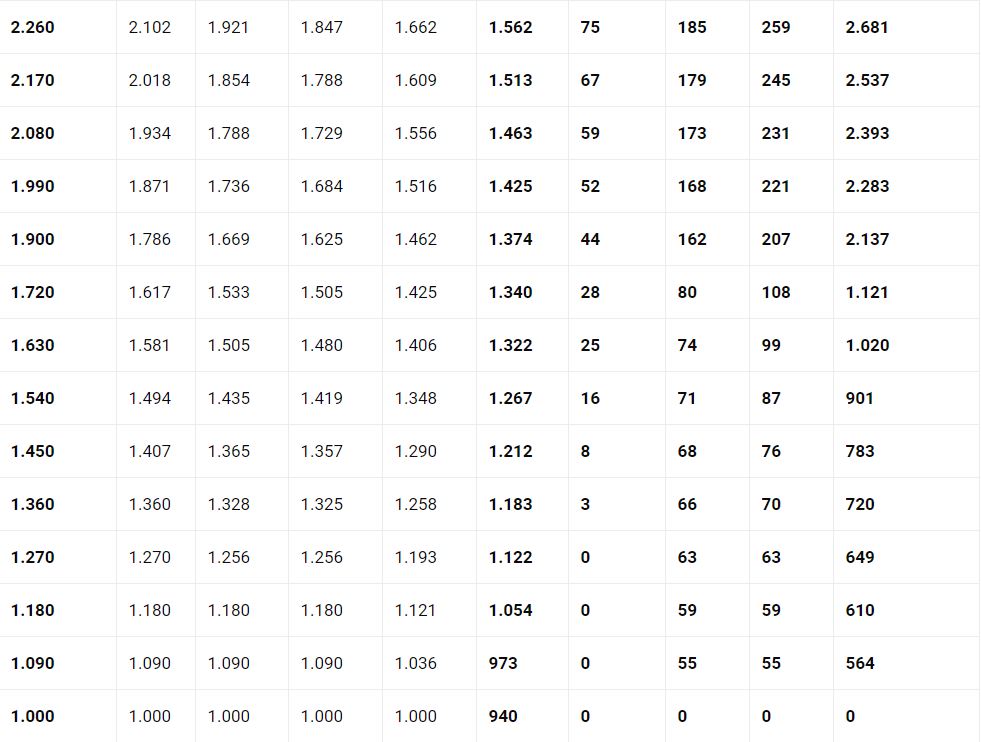 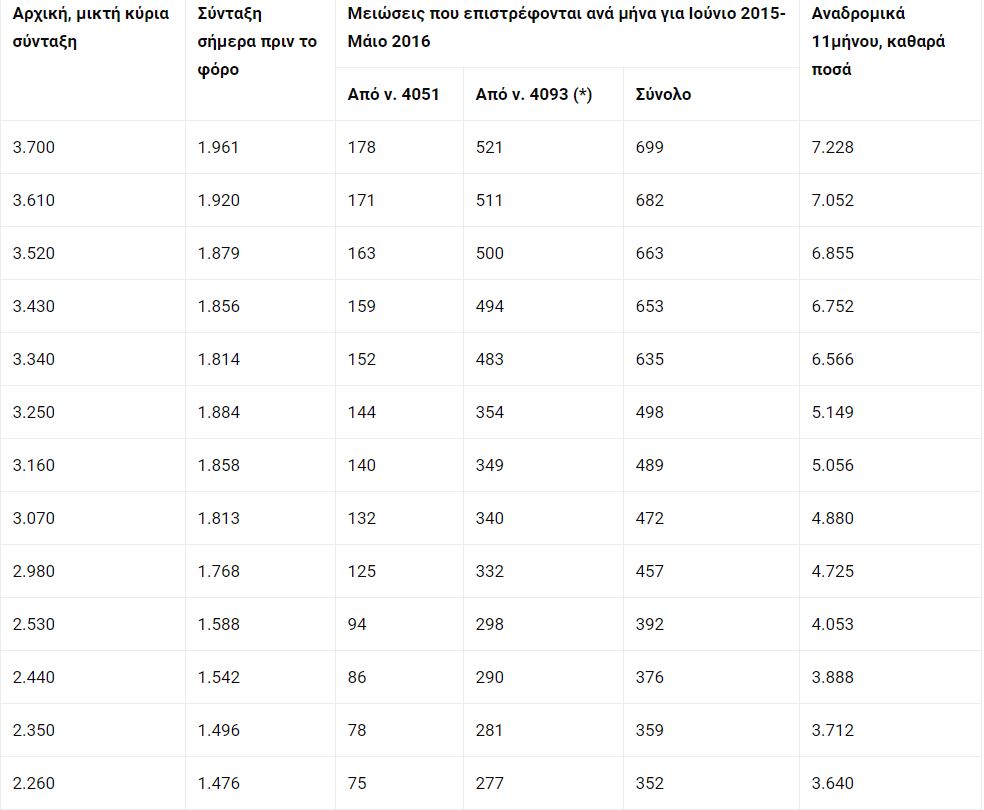 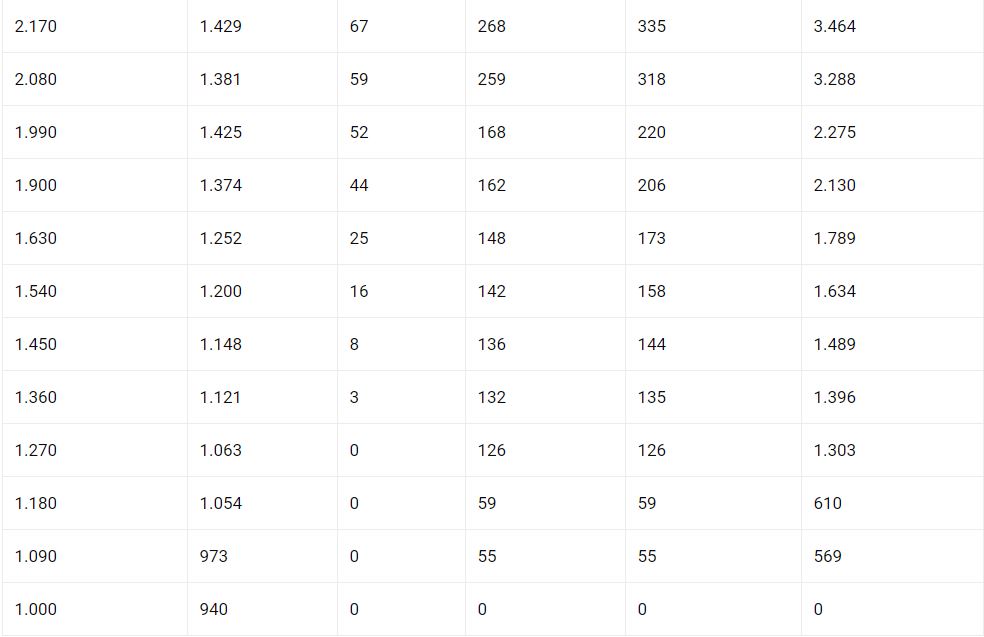 (*) Law bookings 4093 are larger because with the issuance of the supplementary pension the sum of pensions increased and the percentages of reductions in the main pensions increased from 15% in 20%, from 10% in 15% and from 5% in 10%.

Retrospectively and increases in temporary pensions

Temporary pensions are coming up with retrospectives of several months at the end of November for 150.000 retirees from Employees 'and Freelancers' Funds.

By order brought to the Parliament by the Minister of Labor Giannis Vroutsis and voted last July, the percentage of the provisional pension increased to 80% for employees and in 70% for professionals and the self-employed, while joining the 70% and farmers. For retirees due to death the temporary increases to 70% of the pension of the deceased (as well as the final pension). For beneficiaries of the disability pension the temporary will be paid depending on the degree of disability as follows: a) temporary 75% with a disability rate of 67% until 79,99%, and b) temporary 50% with a disability of up to 66,99%.

The minimum amount of the temporary stays at 384 euro.

Who “lock” pension before 62 – What the insured should know

Retirement before 62: How to win up 7 years

They unblock 45.000 Pensions with successive insurance - New application with more favorable terms for those who were rejected

EFKA will henceforth issue "express" decisions for pensions with successive insurance in two or more Funds, as with ...