Depoliticization: The position of the Mayor of Grevena Mr. George Dastamanis in the Regional Council of Western Macedonia for SDAM (Video)

Depoliticization: The position of the Mayor of Grevena Mr. George Dastamanis in the Regional Council of Western Macedonia for SDAM (Video)

As “general, vague and mainly unfair for the Regional Unit of Grevena "characterized the Master Plan by the Mayor of Grevena Mr. George Dastamanis during his speech at the Meeting of the Regional Council of Western Macedonia that took place on Thursday 26 November 2020 with the teleconferencing process.

More specifically, Mr. Dastamanis stressed that the de-lignification initiated by the Government is "violent as it leads to a vague productive and economic model with many inequalities" while emphasizing that Grevena "has paid for lignite" through the fictitious GDP since our place appeared over time as "rich" resulting in his exclusion from necessary funding programs to support disadvantaged areas.

in addition to, The Mayor of Grevena pointed out that the territories of Kozani and Grevena, in all European funding to date, belong to NUTS level regions 3 as set out in the Rules of Procedure of the European Parliament and of the Council establishing the Fair Transition Fund.

Therefore, in accordance with the relevant regulation, A unified Territorial Plan for Kozani and Grevena should be prepared giving weight to the individual territorial characteristics of each region. End, Mr. Dastamanis argued that most of the funds of the Fair Transition Operational Program should be returned to the Kozani-Ptolemaida-Florina axis which is directly affected by the de-lignification but without excluding the areas of Grevena and Kastoria. 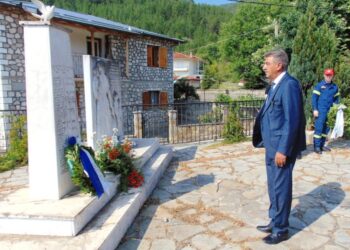 Municipality of Grevena: In Mikrolivado and Kipoureio the Mayor George Dastamanis for the Holocaust - Climate of emotion in the events of honor and memory

Dastamanis: Positive developments for Grevenitis-The Green Fund finances with 150.000 euro the study for the upgrade of our urban river

His deepest satisfaction and warm thanks to the Minister of Environment and Energy Mr. Costas Skrekas, the General Secretary ...