ARSY: Closing of the Kozani Popular Market: From "individual responsibility" to collective punishment

ARSY: Closing of the Kozani Popular Market: From "individual responsibility" to collective punishment

The government, through the competent ministries, as published in the Government Gazette decided to close the central public market of Kozani (Aristotle) for ten days!

The decision was made after a suggestion of the Department of Commerce of the Region of Western Macedonia because some sellers were found who did not observe the "sanitary distances" or did not wear a mask.

The mass market players argue that only 3 sellers were the offenders by them 350 total exhibiting goods to the popular.

The deputy governor in charge says that there were many more.
However, the fact is that all farmers and small traders who take their bread from the public market are punished because some of their colleagues committed violations related to the measures to deal with the pandemic..

What the industry representatives suggest and it makes sense, obvious but it is also provided by the health protocols to make recommendations, remarks and even to punish offenders who endanger public health. But to punish the sellers of the popular, the vast majority of whom reverently adhere to sanitary measures, It is unfair, vengeful, it is reminiscent of "other situations and other eras" and contains elements of service to other interests.

The "punishment" of farmers and other small professionals in this area , in this way, does not take into account the financial situation of these people who are experiencing not only the crisis but also the catastrophic weather phenomena that have affected our Region. Even the closing of a popular day means the destruction of a large quantity of vulnerable products (peaches, grapes etc.). This "punishment" concerns not only the sellers but also thousands of consumers who must turn "elsewhere", paying much more even for lower quality products as they are obliged to secure the food of the week.
It is at least hypocritical for the representatives of the Government who have the main responsibility for the rapid spread of the cases lately. (increase in occupancy, non-observance of sanitary measures, public, by its executives etc.) to happily "punish" farmers and micro-professionals who, among other things, are responsible for the fact that by carrying out EU orders and implementing the reactionary CAP, it has put them in a difficult financial position.
We as a Regional Scheme "Left Coexistence for the OVERTURN in Western Macedonia" are opposed to this unjust and vengeful decision and ask for it to be revoked. 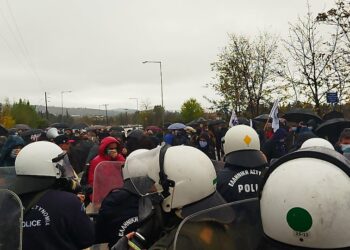 ARSY: We "welcome" the Prime Minister of Poverty, of unemployment and the Environmental catastrophe of D.. Of Macedonia