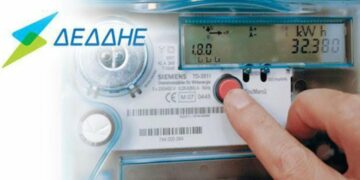 HEDNO: With "smart meters" it will deal with the "non-technical losses" of the network

HEDNO: With "smart meters" it will deal with the "non-technical losses" of the network

"Smart" electricity meters put an end to the phenomenon of power theft, which increased twenty times in the last 15 years.

Although the HEDNO points out that the recession due to pandemic period 2020 – 2021 may create obstacles in the effort to reduce theft, however the Energy requlator authority considers that "large-scale replacement of end-of-life meters with 'smart meters' is expected to have a direct positive impact on the detection and removal of burglaries carried out by interfering with the meter and generally in active services".

This follows from her decision Energy Regulatory Authority (RAE), which approved its regulated revenue Network Administrator for the period 2021 – 2024, decision taken while the process is in the final stages of its sale 49% of HEDNO shares by the parent PPC.

According to RAE, based on the cash replacement program proposed by HEDNO (practically start it 2022, completion of 2030) It is predicted that street thefts will decline in 2031 to its levels 2003-2004 (0,2%).
While the total losses (which include those that are not due to theft but to technical parameters) will decrease at an average rate 5,1% the period 2020-2031.

ΔΕΗΑΝ: 15 construction in the battle for a new photovoltaic park in Kozani

They show great interest 15 construction for the photovoltaic park of PPC Renewables (ΔΕΗΑΝ) in Kozani that was announced at the beginning of August ....

Σκρέκας: Who will see increases in electricity? – Increase 20% in the heating allowance

Energy Minister Costas Skrekas spoke about the increases in electricity tariffs, noting that it will be from zero ...

Social Invoice: When do applications "close"?

For the Social Electricity Tariff, Citizens can apply at any time during the year (but first ...

Drift: "No" of suppliers to RAE – The fee and the withdrawal clauses are not abolished

RAE's proposals for electricity tariffs were not accepted by the companies in the sector, warning about ...