Nikos Hardalias: The viral load in the Municipalities of Eordea and Kozani is particularly high and is approaching the alarm point

In the 180 million amounts to the amount from which the businessmen of Western Macedonia benefited, through the actions of the Region to support entrepreneurship, according to the Regional Governor George Kasapidis.

During an online press conference on the support actions of the companies in the region by the RDP of Western Macedonia, the Governor pointed out characteristics:

"Over 3.000 businesses have benefited from these actions and proportionally we can say with certainty that it is the most money that any other region in our country has spent to support entrepreneurship ".

In particular, he mentioned that in the operational program of the Region there are two categories of actions.

On the one hand, those that belong to the European Regional Development Fund, where they were developed until today 9 actions and others are imminent 3, total budget 74 million. on the other hand, three other actions to be launched in the European Social Fund and another action related to boosting self-employment.

The first cycle has already been completed in it, total budget 4,5 million. euro. "In total, we have spent so far 79,3 million. euros from the resources of our program to support entrepreneurship, of extroversion, of innovation and the interconnection of our companies with research institutes through measures and actions "he said.

According to Mr.. Kasapidis, "Western Macedonia is in the first place in terms of supporting entrepreneurship through available resources of its operational program" while the same is true for other actions in support of the health sector where there are approximately 50 from. euros during this period, the last 11 months. And here proportionally is the most money that has been put from any other region of the country out of all 13 regions, for this sector ".

Including, The Governor pointed out that two invitations are currently underway, one to boost liquidity for small businesses with turnover below 10.000 euros and the other for general entrepreneurship with 5,5 million where the subsidy amounts of the companies that will be included in actions defined by the program reach the level of 70%.

"I personally do not remember such aid rates being recorded in recent decades in our country except in the region of Thrace. This shows the interest and the anxiety of the regional authority for the support of entrepreneurship in Western Macedonia with the maximum of the possibilities that we have "added the Regional Governor.

From his side, the General Manager of KEPA - ANEM Spyros Skotidas announced that in the coming days announcements will be made for 1.740 companies that will be selected for funding on the occasion of the pandemic and from tomorrow applications will be accepted from companies that can get, depending on their costs, from 1.000 as 1.800 euro.

Kasapidis repeated, end, that "there is a commitment from the Minister of Development himself and from the government to additionally support Western Macedonia with additional amounts to strengthen entrepreneurship". The relevant action will be prepared by the Ministry of Development itself as there is no possibility to increase the budget of this call which has already been closed to enhance the liquidity of the companies of Western Macedonia.. It will apply, after all, for the companies of Western Macedonia and Western Attica that have remained closed for an extended period of time due to the coronavirus.

Meeting of the Environment Committee of the Region of Western Macedonia (by video conference through the service e:Presence.gov.gr) on Wednesday 10/3/2021 and time 11:00...

The Economic Committee of the Region of Western Macedonia is meeting, on Tuesday 09/03/2021 and time 10:00 με τηλεδιάσκεψη με 29 issues: Approval... 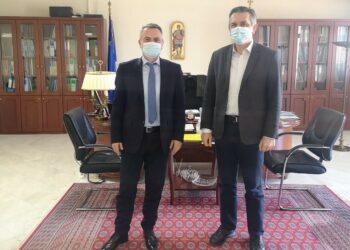 To operate the Pulmonary Department at Mamatsio GN immediately. Kozani and the Oncology Department at Bodosakeio G.N.. Ptolemaida, asked the Regional Governor of Western Macedonia George Kasapidis, by the Governor of the 3rd Health District of Greece Panagiotis Bogiatzidis

With the Governor of the 3rd Health District of Greece Mr.. Panagiotis Bogiatzidis met on Thursday 4 Of March 2021, ο Περιφερειάρχης Δυτικής...