Focus: On the table 4 support measures – Plan to open by 15 Of March

Focus: On the table 4 support measures – Plan to open by 15 Of March

The focus has been closed for several weeks due to the coronavirus and now the margins for its recovery are dwindling.

Την πρόθεση της κυβέρνησης να λάβει new measures has already been announced by the Prime Minister, Kyriakos Mitsotakis on Saturday during his visit to Trikala. According to his report OPEN TV and her Sofias Fasoulaki, all that remains is to ascertain whether there are cash for this purpose.

In each case, The measures that the government is considering to support the industry are the following:

Scenarios for opening the focus

Anyway, two are by far the most prevalent scenarios for the opening of the cafes, of bars and restaurants. According to the OPEN report or will open on 15 Of March so as not to miss the Net Monday holiday or just before Easter. Already, the pressure on restaurant owners is stifling. The 2020 they saw it 50% of their turnover disappears. From focus, last year were lost 4 billion. euro and for each day lockdown are lost 600 million. euro.


Georgiadis: The restaurant opens in March

Απαντώντας στο ερώτημα γιατί ξαναέκλεισε το retail, stressed that the measures taken will be of the accordion type, that is, depending on the epidemiological data. «Only the accordion will be the measures , anyone who has not yet understood does not understand what a pandemic is. Σταθερότητα δεν μπορεί να υπάρχει. Sometimes we will have stricter and sometimes looser measures. This will go for as long as needed, as long as there is a risk of death we will go accordion. There is a country that does not have accordion decisions; Oι νέοι κανόνες έχουν ως στόχο να υπάρχει λιγότερος crowding at the streets. We are not interested in traffic on the roads by car, we are interested in pedestrians on the streets ".

For focus, The Minister of Development characteristically said that "has a way to open, let's go for him March or later. Αλλά θα βρούμε τρόπο να βοηθήσουμε τις επιχειρήσεις». 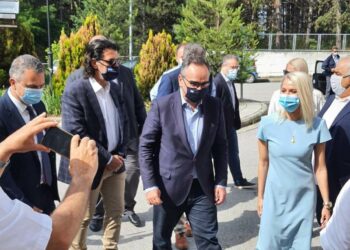