With increased possibilities and a new form, the platform of the General Secretariat of Information Systems of Public Administration of the Ministry of Digital Government was put into operation at gov.gr for the issuance and use of electronic fees in favor of the State.

The new platform presents significant technical improvements for easier use by citizens and businesses, while the use of English is now supported. Specifically, have been implemented:

- Improved appearance and harmonization with the standards of the other applications of gov.gr

- Ability to adapt to an environment of "smart" mobiles, so that the use of a computer is not necessary and the process can be completed immediately and easily from anywhere

- Improvements in the operation of the application, which will facilitate the employees of the institutions regarding the process of authorizing them to commit the fees.

Until today, in the e-payment service have joined 63 public services while from 2017 have been issued over 22 millions of electronic payments freeing citizens and businesses from an equal number of trips. Specifically, each month on average issued over 407.000 electronic payments. In total from 2017 until today they have been collected by the Greek State through the e-payments approximately 1,315 billion euros. 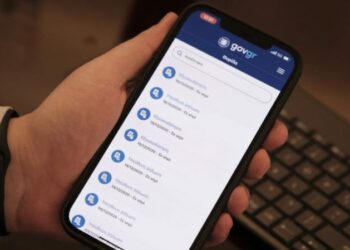 Among other supporting documents that citizens must provide, for a series of transactions, σε υπηρεσίες του Δημοσίου είναι και οι φωτογραφίες....

Gov-ERP: Another tool in the digital "quiver" of the state, this time to shape the country's economic policy,...

Replacement of driving license through gov.gr from today

The services for the driving licenses through gov.gr are available from today for the thirteen regions. Τα συναρμόδια...