The Member of Parliament SYRIZA PS. Π.Ε. Kozani Mr.. Calliope Vetta, on the occasion of the bill of the Ministry of Labor, met recently with working bodies of PE. Kozani.

At first, visited the Kozani Labor Inspectorate, where he talked to the boss Mrs.. Princess Despina and labor inspectors.

There was an extensive discussion and exchange of views on undeclared work, land workers and their service problems, It was agreed that the Labor Inspectorate was institutionally degraded by the very first interventions of the government, while serious reservations were tabled for the transformation of the Labor Inspectorate into an Independent Authority.

Alongside, the change of status for the suspension of employment contracts was discussed, as well as the delayed notification of the suspension, creates a margin for exploitation by employers.
Afterward, held a meeting at the Department of Occupational Safety and Health of Kozani, with the boss Mr.. Paschos Vassilis and executives of the service.

In the discussion, reference was made to the provisions of the bill that subvert labor rights while, Special mention was made of the fact that most and most serious accidents at work occur during overtime and overtime, finding that raises even more concerns about the attempted changes in working time by the Ministry of Labor.
End, visited together with the member of N.E.. SYRIZA PS. Kozani Mr.. Fani Karabika the Labor Center of Eordea, where he met with members of the Board. and specifically them: President Mr. Tsiflidi Anastasio, AD Vice President Mr.. Temi Athanasios, C. Secretary Mr. Kakoulidis Theodoros, and members Mr.. Xanthopoulos Charalambos, Arsenidi Elias, Baltzi Anastasio.

It was agreed in the debate that the bill should be withdrawn while the next actions of the trade unions against the government's methods were discussed.

Mrs.. Vetta stated that the Minister of Labor legislates the positions of the big employers against the views of the social and labor bodies., of the scientific associations and the political parties of the opposition.

He stated that the world of work will not tolerate the restructuring of labor relations while, end, referred to the commitment of SYRIZA – PS. that the provisions of the bill will be repealed as soon as there is a change in the political correlations. 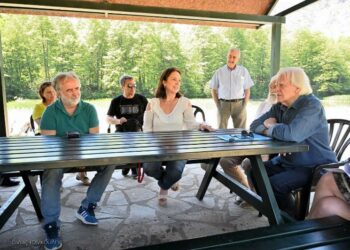 Calliope Vetta: The poetry of Tassos Livaditis speaks to the hearts of today's people – Participation in the two-day poetry conference in Grammos

Calliope Vetta: The government must immediately redress the injustice to PPC retirees who were excluded from paying 33% of special allowances

The Member of Parliament SYRIZA PS. Π.Ε. Kozani Mr.. Kalliopi Vetta submitted a parliamentary question to the Ministry of Environment and Energy on: "Unfair ...

Calliope Vetta: The landscape must be clarified immediately in order to fully ensure district heating in Kozani without new charges

Calliope Vetta: The hospitals of PE Kozani are facing, under the responsibility of the government, serious shortages in doctors