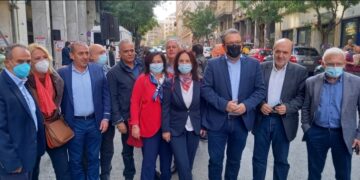 The Member of Parliament SYRIZA PS. Π.Ε. Kozani Mr.. Kalliopi Vetta attended the protest rally that took place this morning at the PPC offices in Athens, in the context of the nationwide strike of the company's employees.

The gathering took place on the main occasion of the announcements of the government and the Board. of PPC. for the delisting of the sovereign rights of the State from the control of the company with the imminent increase of the share capital, while hundreds of PPC employees participated. from all parts of Greece, trade unionists and Opposition MPs.

Mrs.. Vetta stressed that the imminent privatization of PPC. will inflict most blows on the whole of Greek society and economy. At first, In a time of growing energy crisis, even greater problems will arise in households and businesses, as the key role of a provider that takes into account the social and developmental interest in its decisions will be absent.
particularly, there will be no control to tame rising energy prices, which will lead directly to the transfer of costs to the end user.
also, should not be overlooked the fact that at the production level there will be a potential burden on industrial electricity, which in turn will make economic recovery even more difficult,

Summarizing, pointed out that the fight to defend the public character of PPC. is a struggle that all citizens must give, to defend the company's growth pillar, tackling the climate crisis and energy poverty, as well as to control the rise in prices.

End, called on attendees to step up their efforts to protect the public good of energy, at a time when there is an international phenomenon of increasing state participation in utilities and basic infrastructure.

The D. in the name of PPC. it will remain, as much as some work the opposite.

The Member of Parliament SYRIZA PS. Π.Ε. Kozani Mr.. Kalliopi Vetta on the occasion of the response of the competent Ministry for his support ...

The Member of Parliament SYRIZA PS. Π.Ε. Kozani Mr.. Kalliopi Vetta submitted a parliamentary question to the Minister of Education and Religions on: «Τα...