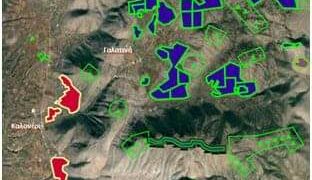 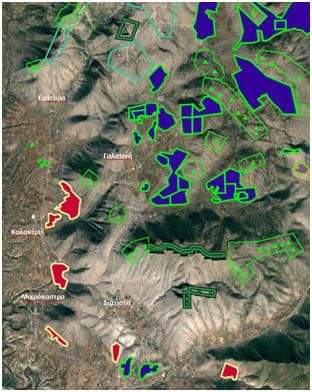 The Parliamentary Group of the KKE submitted to the Parliament the no. 3699/3-3-2022 Question , on the subject, "Do not hand over the grazing areas of the Askio area of ​​the Municipality of Voi of Kozani PE for the construction of photovoltaic parks".

The answer given by the Ministry of Energy and the competent services to the above question for the installation of photovoltaic stations in the area of ​​Eratyra- Galatini , reveals the magnitude of the destruction of our region.

It turns out that the implementation of these projects moves against the needs and rights of the inhabitants of the area, that energy planning based on profit and capitalist development is unpopular.

We point out that the Ministry of Environment & Energy, implementing the new National Plan
for Energy and Climate, has made a number of institutional interventions, in order
to achieve the ambitious goal in a rational way, which has been set for RES.

We emphasize that their development is carried out with terms and safeguards
of the particular natural ecosystems of Chora and the man-made environment, but also
without negatively affecting the developmental physiognomy of the areas where they are located.

Although we consider the existing, environmental and spatial character, institutional
framework is sufficient to ensure the environmentally sound development of RES units, the
Ministry of Environment and Energy ensures its continuous modernization.

The procedures are already in progress, on the one hand for the revision of the existing Special Spatial Framework for RES, on the other hand for the institutional shielding of the protected areas of Chora.

Answer to no. 3699/03.03.2022 Question by MEPs. Λ. Stoltidis and G.. Deli on "Do not hand over the grazing areas of the Askio area, Alloy power 1MW. Galatini and Eratyra of the Municipality of Voio of PE. Kozani for the construction of photovoltaics »

About: The no. 3699/03.03.2022 question by Members. Λ. Stoltidis and G.. Deli
In response to the question of the issue submitted to the Parliament by the deputies Mr.. Λ. Stoltidis
and G. Deli, and regarding matters within the competence of our service, we bring to your attention the
following:

In the context of the transposition of the new European Directive 2018/2001 to promote usage
from renewable sources, the member states, including Greece, committed to the share
of energy from renewable sources to gross final energy consumption will amount to
at least 32% for 2030, target that for the Greek data has been included in the National Plan for Energy and Climate (ΕΣΕΚ), which was published in the Official Gazette (B ' 4893/31.12.2019).

Specifically, the government revised the target for the participation of RES in the gross final
energy consumption by the year 2030 from 31% which was stated in the original ESEK draft in
at least 35% up to the year 2030.

Based on the above objectives, to achieve, in the best financial way, of its energy targets 2030 it is estimated that they will need to be installed by 2030, in addition to operating
stations, about 9.000 MW of new RES projects. At the technology level this is estimated to be achieved
from new wind and photovoltaic stations (about 8.100 MW), while less than 10% of
projected new installed capacity will concern projects of other RES technologies (see
Panel 9: Evolution of installed capacity of RES units for electricity generation, p. 55514 Government Gazette B
4983/2019).

To achieve the goals set with the ESEK, recently published n. 4685/2020
“Modernization of environmental legislation, incorporation into Greek legislation of the Directives
2018/844 and 2019/692 of the European Parliament and of the Council and other provisions. " (Government Gazette
A' 92/07.05.2020). According to the explanatory memorandum of the law, the process of environmental
licensing in Greece, despite the changes that have taken place in the legislation, it continues to
is a time consuming administrative process and therefore an important deterrent to
investment promotion.

Ο ν. 4685/2020 (Chapter A) shortens, simplifies and modernizes, within the framework of EU legislation, the environmental licensing process, entering a faster one, safer and more efficient licensing framework.

In the context of simplifying and accelerating environmental licensing, with the Ministry
Decision no. ΥΠΕΝ / ΔΙΠΑ / 74463/4562 / 29.07.2020 (Government Gazette B 3291/2020) the current one was amended
regulatory framework for the classification of RES stations. in environmental licensing categories, with
increase the relevant exemption validity limits for environmental licensing and inclusion in
Standard Environmental Commitments, where deemed appropriate, per RES technology.
In addition, ο ν. 4685/2020 (Chapter B) introduces a transparent effective and simplified
frame, which modernizes and accelerates the first phase of licensing of RES projects, the production license,
replacing it with the Producer Certificate which largely results from
automated process of the new Electronic Register of Electricity Generation by
ΑΠΕ and ΣΗΘΥΑ (ΗΜΠΗΕ ΑΠΕ-ΣΗΘΥΑ).

Purpose of replacement, is the drastic reduction of time, with the aim of aligning Greece with the European directive which requires the completion of the licensing of RES in a period of two years for the majority of projects and three years in exceptional cases, the release of unused land and the evaluation of pending applications, with respect to location constraints and issues relating to national security and public health. In the second year, the next stages of the licensing process will be simplified, up to the last which are
Installation and Operation Permits.

According to the current licensing framework for RES stations, specific criteria are set and
all relevant parameters are taken into account for their installation, among which
environmental and spatial. particularly, the Special Framework for Spatial Planning and Sustainability
Development for Renewable Energy Sources (ΕΠΧΣΑΠΕ) valid from 2008 (No. Ap.
49828/2464/12.11.2008, Government Gazette B 2464/3.12.2008) gives directions for resolving issues
location and installation of RES projects, taking into account their potential impact on
natural and man-made environment.

Especially with regard to solar power plants, such as
photovoltaic stations, in the article 17 of the current EPHSAPE are provided special conditions of location such as priority areas and exclusion zones.

It is noted that no limit has been set on the installation of photovoltaic stations in pastures.
With the with Α.Π.. ΥΠΕΝ / ΔΧΩΡΣ / 58726/926 / 16-06-2021 (ΑΔΑ: 9Δ4Ι4653Π8-7ΛΑ) Decision of the Minister
and Deputy Minister of Environment and Energy, a Staff Coordination Committee was set up and
Monitoring the study for the evaluation and revision of the Special Spatial Framework
for Renewable Energy Sources (Ε.Χ.Π. Α.Π.Ε.) (B ' 2605/2021). The purpose of the review is
energy upgrade of the country, which will provide new development opportunities in many fields
and ensuring the creation of sustainable wind and solar installations
energy through their harmonious integration into the natural and man-made environment and the landscape.

Environmental licensing takes place, after the issuance of production licenses ( or Certificate
Producer) by the Energy Regulatory Authority (RAE), by submitting an Environmental Study
Impact (Μ.Π.Ε.) to the competent environmental authority and the Approval of the relevant Environmental
Terms (Ε.Π.Ο.) for installation and operation. According to the relevant procedure, provided that
M.P.E. file. deemed complete, the M.P.E.. forwarded to the relevant Regional Councils for
disclosure and information to the public as well as to the co-competent Services for the submission of
their views, including the services of the Ministry of Culture, according
the current legislation.

The final decision of the Management for the implementation of the proposed
projects, taken after consultation with the public and the Services and
issuance or not of the Decisions of Approval of Environmental Conditions of the projects.

Following the licensing process of RES projects., after the issuance of the EPO Decision.
This is followed by the issuance of installation and operating licenses. The issues of granting the above
licenses are regulated in detail by the provisions of Article 8 of law 3468/2006 (Government Gazette A ' 129), such as
apply. The RIS is already planning the simplification of the 2nd licensing phase that concerns the procedure
issuance of Installation and Operation Permits.

In addition, for the purpose of protecting high productivity agricultural land from increased
installation of photovoltaic systems, we inform you that with the article 24 of n. 4643/2019
"Energy market liberalization, PPC modernization, privatization of DEPA and support of
Α.Π.Ε. and other provisions. ", (Government Gazette A ' 193) par. 6 of the article 56 of n. 2637/1998
(Government Gazette A ' 200) and a special framework for the installation of photovoltaic stations on high agricultural land was introduced
productivity.

Based on the above, It appears that the general framework for location and evaluation has been formed
of the environmental impact of RES projects. in every region of the country, and have been given
guidelines for the harmonization of all local or supra-local spatial plans
define in detail the optimal locations of the projects, as defined in the article 21 of
ΕΠΧΣΑΠΕ.

The goal is to upgrade the country's energy, which will give new development
opportunities in many fields of activity, while maintaining the physiognomy and
protection of the natural and man-made environment.

About photovoltaic stations in the mentioned in the question of the subject, and according to
after 22.03.2022 elements of the RAE geoinformation system (available on the website
https://geo.rae.gr/), in the Municipality of Voio hold a production license or producer certificate,
photovoltaic 35 stations of total power 894 MW, which will be installed on an area 27.026
acres.

The Head of Management
Dimitrios Antonopoulos

KKE: Events in Siatista and Grevena

The Central Committee of Western Macedonia organizes events- discussions for the next period, specifically: Saturday 25/6 the TE of Grevena ,at 11.30...

In the context of the political excursion of the Party Organization of the KKE of Western Macedonia, the manufacture 24/6/22 will tour the area ...

The Party Organizations of TE Kozani of the KKE, organize tours

The Party Organizations of TE Kozani of the KKE, organize workplace tours with the party's four-page booklet, with...