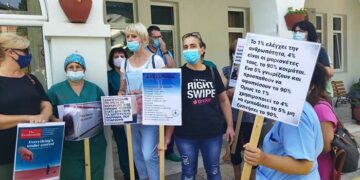 With placards, masks and the slogan "no to compulsory vaccination" the protest of health at the General. Kozani "Mamatsio" - See videos and photos

With placards, masks and the slogan "no to compulsory vaccination" the protest of health at the General. Kozani "Mamatsio" - See videos and photos 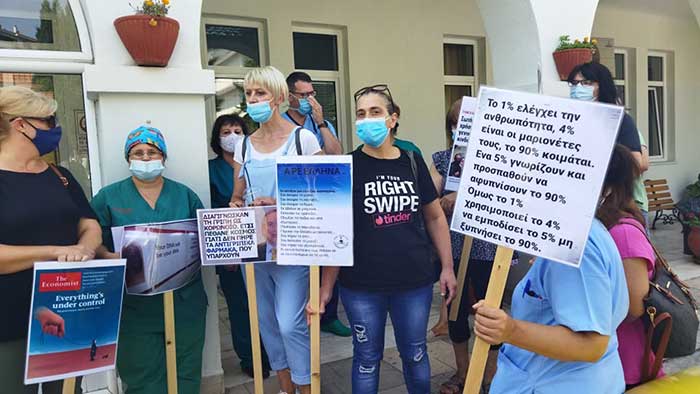 With placards, masks and the slogan "no to compulsory vaccination" was the protest of the health of the General. Kozani “Mamatsio Kozani in the courtyard of the hospital at noon on Wednesday.

In fact, the doctor of the Mamatsio Hospital of Kozani, John the Father, Speaking about the reasons for the protest, he mentioned characteristics: "I am in favor of justice and human self-determination; there are legal and just means by which our Republic, if we did not change regime, allows us to use ". Still wondering if the vaccine ultimately helps or not, Mr. Pateras replied that: "There is no evidence of anything, but evidence and medical history will show it ", while another health worker, stated that he is in favor of the human rights of self-determination and that one should choose for oneself what will happen to one's body. Finally, Ms. Tsaloukidi's response to those who were vaccinated was:, "No one forced them to be individually responsible but they did not accept coercion…"

After the end of the extraordinary meeting at the General Assembly. "Mamatsio" anti-vaccinators gathered outside the town hall of Kozani expressing their demands.

In an announcement of EODY, on Monday 25 October , the following are reported: The new laboratory confirmed cases of the disease that ...

EKPA study on the immunity of vaccinated people: These are the most "fortified" opposite the Delta

In an announcement of EODY, on Sunday 24 October, the following are reported: The new laboratory confirmed cases of the disease that were recorded ...

The distribution of cases on Thursday 21 October, according to ERT tables as follows: On Thursday 21/10...