Spartakos participated in the mobility week of the Municipality of Eordea

Spartakos participated in the mobility week of the Municipality of Eordea

Mobility week. An action that aims to emphasize the change in the behavior of citizens and their shift to more sustainable modes of movement, like the bike, the gait, the means of transport and the combination of them in each route.

Each year it is awarded by a special independent committee of experts, the city that will show great participation of its citizens in the actions of sustainable and alternative modes of transport.
SPARTAKOS, always a participant in "social actions" and "actions of societies", gave its own presence at the events organized by the Municipality of Eordea with the culmination of Tuesday's event.
Close to children, who starred in the event, The Association assisted with three bicycles which were drawn at the closing ceremony, in an effort to motivate children and beyond, to follow this week's message which was none other than "Move responsibly".

This is not the first time that our technicians respond immediately and repair network damage and therefore the ... 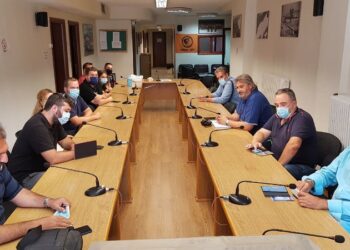 Visit of a SYRIZA youth committee headed by its Secretary, at the offices of Spartacus

Seeking, recognizing and appreciating the contribution, the interest, the activity and initiatives of young people, Spartacus, με ιδιαίτερη...

Spartacus: Enjoying the coolness of… lignite

Heat, heat, suffocating situations. Demand in full as the Greek citizen seeks a little coolness in the prolonged use of air conditioners ...

The offices of Spartacus will be closed for preventive disinfection