TEE / TDM group meeting with representatives of the KKE

TEE / TDM group meeting with representatives of the KKE

KKE members handed over printed information material to TEE / TDM representatives, with the positions of the KKE for the protection of the environment, in the opposite of the policy of the "Green New Deal", with the decision of the Central Committee of the KKE on the imperialist war in Ukraine, with the announcement of the Department of Health - Welfare of the KKE Central Committee for the Health bill and with the measures they propose for the relief from accuracy.

The President of TEE / TDM Nikolaos Sylliris, after welcoming the members of the KKE and thanking them for the information material, informed them about the constructive conclusions he has drawn so far from all the contacts and meetings he has held since taking office., with local actors and mentioned some of them, as related to the issues raised by them and are included in the printed material they shared.

More specifically, as for the green new deal and the green hydrogen design, The President of TEE / TDM was in favor of the development of this technology in our region and stated that as a body the Technical Chamber of Greece should support and seek the implementation of new technologies, provided that they are not identified with or associated with depoliticization. As the white dragon is a technology that will be fully developed over a period of several years, other economic activities should be carried out at the same time, to quickly advance the projects of the warrant program and to complete the transition to the new production models before the de-ligation.

TEE / TDM President Nikolaos Sylliris also said he was in favor of "re-lignification", as he characteristically called it, although it takes place under exceptional circumstances, because even so and for an indefinite time horizon, the operation of the lignite plants was extended, giving economic breath to the area and increased the use of lignite in electricity generation, partly ensuring the country's energy self-sufficiency.

The members of the KKE, in their position on developments around de-lignification, said it was not a "thunderbolt in the air" but a last step in the process of liberalizing the energy market, policy pursued by all previous bourgeois governments. On the other side, the KKE has a comprehensive proposal for the energy that is formed taking into account 3 Criteria:

Their view is that the above criteria can be combined, utilizing all forms of energy (e.g. Lignite, geothermal, hydrocarbons, hydroelectric, photovoltaic, wind turbines etc.) with a policy that treats energy as a social good and not as a commodity.

As for measures to alleviate precision and energy poverty, KKE members submit their proposals for immediate and full operation of lignite plants without the commitments of the stock market of pollutants that artificially increase the price of lignite, the abolition of the energy exchange and the revaluation clause, the withdrawal of the country from EU sanctions on Russia, which are ultimately paid for by the people, while parts of the capital, such as shipowners, treasure from the transportation of the very expensive American LNG.

A discussion followed on the problems of the economy that serves the profit of capital and not the popular needs, for the common problems that everyone faces but for the differentiation of the solutions chosen for them, on the need to address them with an overall pro-people strategy and on how important it is to highlight problems at regional level, as in central services they are consumed with other issues, that do not touch the citizen so much.

"Conduct of an enlarged Steering Committee of the TEE / TDM, in Ptolemaida »

The enlarged meeting of the Steering Committee of the Western Macedonia Department of the TEE was a great success, held on Wednesday 22-06-2022...

On the occasion of the continuous meetings during the last year, part of the Steering Committee of TEE / TDM with Local ...

Ladder of GENOP / PPC-KIE, consisting of the President of the Federation, Mr. Adamidis George, the 1st Assoc. Secretary, Mr. Adam Eleftherios, the ... 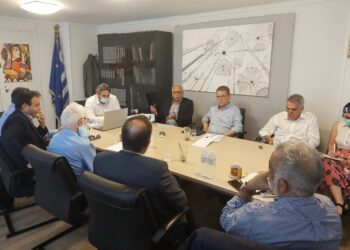 European Mission of Cities: Meeting of the six Greek mayors at RIS with the participation of Lazaros Maloutas

The first meeting of the mayors of the six Greek cities selected by the European Mission "100 Climate Neutral and Smart ...