The Deputy Regional Governor of PE demands the carrying out of controls for the origin of the agricultural products in the Popular Markets.. Kozani

The manufacture 10/12 Nikos Androulakis at the Kozani Art Gallery

Arrhythmia due to power outage and water supply interruption on Thursday 9/12, on T.. K. Iron, Liveron and Anthotopou.

Siatista: 1Enduro – ride. Watch the video for the event

The Deputy Regional Governor of PE demands the carrying out of controls for the origin of the agricultural products in the Popular Markets.. Kozani

Carrying out controls for the origin of agricultural products in the Popular Markets of the Prefecture. Kozani requested in a letter to the competent services the Deputy Regional Governor of Kozani Grigoris Tsioumaris.

These are large quantities of Florin tomatoes and peppers that have recently been imported from Albania., Skopje and Turkey in the Greek market and specifically in the vegetable markets of our country through the Customs, which have been cultivated without the conditions set by the EU. , with pesticides that are not controlled by the EU., χωρίς σημάνσεις και τυποποίηση και στην συνέχεια «βαπτίζονται» στην ελληνική αγορά ως ελληνικά προϊόντα και καταλήγουν στα τελικά σημεία πώλησης να πωλούνται ως ελληνικής προέλευσης.

The issue was raised to the Regional Governor of Western Macedonia, George Kasapidis, by the Association of Producers of Popular Markets.. Kozani during his visit to Serbia on 13 September, accompanied by the Deputy Regional Governor of Kozani Grigoris Tsioumaris and the authorized advisor of Business Development Menelaos Makrygiannis.

The letter of the Association of Producers of Popular Markets P.E.. Kozani is as follows:

Recently, they are introduced in the Greek market and specifically in the vegetable markets of our country by the Customs, large quantities of Florin tomatoes and peppers from Albania, Skopje and Turkey, which have been cultivated without the conditions set by the EU. and with pesticides that are not controlled by the EU., without markings and standardization and then "are baptized»In the Greek market as Greek and end up at the final points of sale to be sold as of Greek origin.

It is therefore observed that the stalls of the popular markets as well as of Western Macedonia are filled with "Hellenized" tomatoes and peppers of Florina of foreign origin that are sold to consumers as “greek tomato” and “Greek pepper of Florina”.

The "Hellenization" of the products takes place either in the initial points of sale, e.g.. in the vegetable markets, or at end points of sale e.g.. in the flea markets by the merchants of the flea markets. It should be noted that in the popular markets of Western Macedonia it has been proven that even when these vegetables bear the legal mark of origin on the packaging crates they are still sold by the sellers. – market traders to consumers as Greek hiding their origin.

Το μεγάλο ζήτημα λοιπόν που τίθεται δεν είναι η διάθεση της ντομάτας και πιπεριάς με «ετικέτα» ως χώρα προέλευσης τις γειτονικές μας χώρες, but the serious phenomenon of their "Hellenization" at the expense of certified products produced in areas of Greece and specifically in areas of Western Macedonia by local producers, if in their final points of sale no product appears anywhere that states e.g.. «originating in Albania»And the unsuspecting consumer is deceived after he finally buys a product other than the one that is deliberately sold to him.

This fact is to the detriment of the farmers who produce in our Region quality certified tomatoes and peppers of Florina (a high-cost crop) and for the benefit of those who make a profit, or they are wholesalers of the central vegetable markets of the country, or local fruit and vegetable traders of the popular markets of our area, taking advantage of the low purchase price of imported and uncontrolled products in question and selling them illegally as of Greek origin, with a disproportionately high quality of quality and origin.

Cat’ extension of the above phenomenon the import of fruits and vegetables with a large residue of harmful active substances of pesticides endangers the public health and specifically the health of the consumer who ignorantly buys and consumes harmful and low quality products of third countries due to the "Hellenizations".

In order to stop this phenomenon, strict phytosanitary controls are required, initially at the borders of our country., but mainly in the local sales outlets of the popular markets regarding the identity of the product (marking) which should accompany the product to the end point of sale, in accordance with current legislation (implementation of the executive Reg (FROM) 543/2011 on marketing standards for fresh and processed fruit and vegetables, as well as the Market Order 7/2009 and the Market Code 136/1946, as amended and in force by N. 3686/2009 and Y.A. 91354/24.8.2017, Article 28 περί Διακίνησης και Εμπορίας νωπών οπωρολαχανικών).

It is pointed out that in neighboring Regions with the Region of Western Macedonia are carried out diligent and frequent inspections by the competent services – food inspectors of the Department of Quality and Phytosanitary Control of the Department of Agricultural Economy and Veterinary Medicine and have already seized and destroyed large quantities of tomatoes and peppers, after the quality controls, batches of vegetables of foreign origin were identified without the marking on the packages provided by the current legislation and then, after laboratory controls, residues of plant protection products were detected in concentrations higher than the maximum permissible limits according to the current legislation..

For the reasons above, ζητάμε να επιληφθείτε άμεσα, through your competent services (DAOK), to stop the trafficking and sale as Greek, loads of vegetables (tomato and pepper of Florina) of third country origin at points of sale in Western Macedonia, activating the control mechanisms as soon as possible and intensifying the controls and sampling at all points of sale and especially in the public markets, in compliance with the relevant legislation (WILL 91354/24.8.2017, Article 28 περί Διακίνησης και Εμπορίας νωπών οπωρολαχανικών), ώστε να αποτραπεί το φαινόμενο της «ελληνοποίησης», with the aim of ensuring the local producer and the protection of the final consumer by placing on the market quality and safe Greek vegetables.

We look forward to your actions.

On Monday 22 November 2021 The regular meeting of the Coordinating Body of Civil Protection of the Kozani Prefecture was held by teleconference under ... 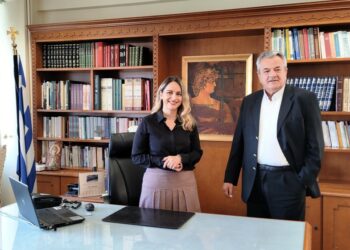 The Delivery - Receipt of the spatial Sub-Region P.E.. Kozani was held today by the outgoing Mr.. Grigori Tsioumari to Mrs. ...

Approval of the allocation of credit was received for the project "EXTENSION OF PLANET FLOOR IRRIGATION NETWORK IN THE TZITZIFOS AREA" by the Economic Committee of the Western Region ... 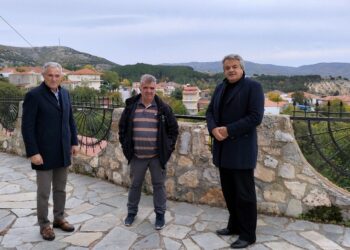 The Local Community of Metaxas located at the southern end of N.. Kozani with the wonderful panoramic square and ...