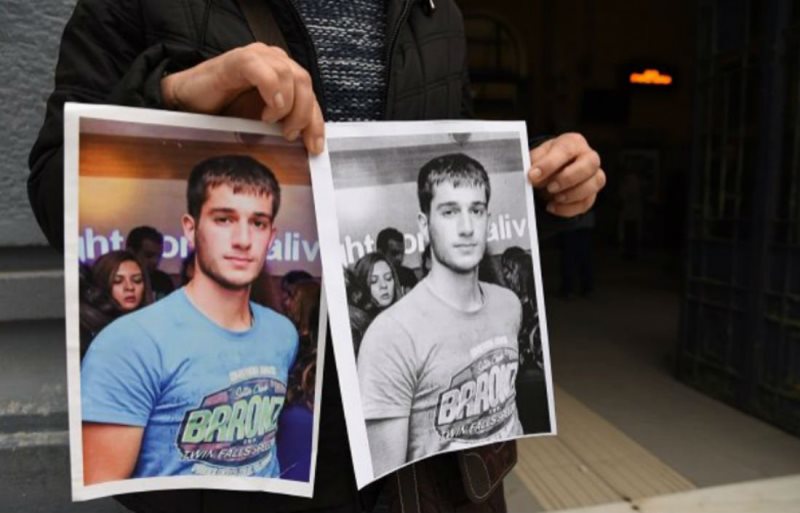 Giakoumaki case: His mother broke out in court for torture

KTEL Kozani: Extraordinary route to and from Athens due to the three days of the Holy Spirit

Privileges of vaccinated: Here comes the legislation on facilities

Message from N.E.. Kozani for the Panhellenic Examinations 2021.

Giakoumaki case: His mother broke out in court for torture

The testimony of Vangelis Giakoumakis's mother is shocking, at the commencement of the trial in b’ degree concerning the death of the unfortunate young man, student of the Dairy School of Ioannina, who was found dead after several days of searching, within walking distance of the School in March 2015.

It is recalled that on 28 June 2019 the Single Member Misdemeanor Court of Ioannina had found them guilty 8 from the 9 accused of incidents of violence against the undefeated student. Vangelis's parents once again met in the city of Ioannina, with his mother filing first.

As Mrs. Fronimaki said, according to epirus-tv-news.gr, Vangelis in the first year lived with the Cretans while in March 2014 she was informed by the person in charge of the Home that there were some problems.

In communication with her, her son reassured her, assuring her that everything was fine and that,what was happening was in the context of jokes that friends make with each other.

"Vangelis did not tell us the truth and misled us while we learned about the incidents from other children of the School", said Vangelis's mother, emphasizing that her son hung out with everyone and his compatriots. The Cretans, however, did not want to hang out with others and criticized him for’ this.

Mrs. Fronimaki in her testimony stated that she was informed that the principal of the school knew everything about the situation that prevailed. When her son changed rooms, the Cretans, as he said, removed him and called him "ruffian" in the corridors of the school and expelled him from their company while only two children from that company were talking to him..

Vangelis's family considered these children his friends when they were looking for the child and while at first they supported them when they started to open their mouths, they walked away and asked them what they were learning from others..

Mrs. Fronimaki referred to the problems her child was facing (flying fruit, tying on a chair, cuffs, towel tying and dragging, flying hot water from a cauldron on his neck etc.). The drop though, as noted, that overflowed the glass and forced her child to change room was when they dyed his shampoo.

When asked by the lawyers why the other children did not talk about all this, Mrs. Fronimaki said that they did not talk because they were afraid. Vangelis wanted to get on well with everyone and his compatriots, he said.

"They say it was funny, I do not know how such a thing can be funny," said Mrs. Fronimaki at some point in her testimony.. Vangelis wanted to finish school and leave, so he did not say anything to avoid further problems.. He was dynamic, social and everything he experienced forced him to suffer. "It simply came to our notice then “eats” everyone", said Mrs. Fronimaki.

In a telephone conversation she had with him, had told him that friends do not make you suffer, adding that in Crete Vangelis had never faced similar problems. When the mother said that whatever is proven in the end, these children are responsible, provoked the reaction of the lawyers.

Prof.’ throughout her testimony his mother was calm however she could not contain her emotion when one of the lawyers showed at the headquarters a photo that was the whole company together and, a video allegedly taken by Vangelis, with his mother asking her to leave both as he could not even see the photo, while she denied that the voice heard in the video was her child's voice.