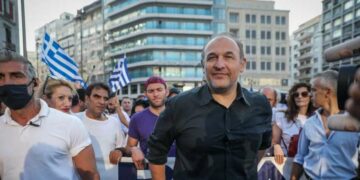 Faidon Vovolis: I concentrate on vaccines because I am a political leader

Faidon Vovolis: I concentrate on vaccines because I am a political leader

Faidon Vovolis in his apology to the disciplinary of the Medical Association claimed that he is a political leader and that is why he holds the gatherings of the anti-vaccinators.

"One can not political leader to concentrate; Who forbids it; Who;». This is how the cardiologist answers Faidon Vovolis in the summons before his disciplinary board Medical Association of Athens next Wednesday. THE intense action of against the obligation of vaccinations brings him face to face with her penalty of temporary suspension of the practice of the medical profession with him, however, to declare that he will remain on the ramparts "observing to the fullest his laws HippocratesFor the benefit of Greeks and giving the slogan of the final battle!

His calls Phaedon Βόβολη in demonstrations, in which they participate vaccines and deniers, and medical positions, developing online for him mockery and vaccines, they did not go unnoticed either Ministry of Health but neither by him Medical Association of Athens, of which he is a member. It is not accidental after all, his recent report Secretary General of Primary Health Marios Themistocleous to "charlatan doctors" in anti-vaccine movement with the cardiologist responding with an offensive post.

In this context, The Faidon Vovoliis summoned by the disciplinary association to a hearing as well, as stated in the relevant document served on him, 'From your behavior, your actions, such as the organization of anti-vaccination concentrations and your public statements about experimental vaccines and its low mortality rate mockery, there may be a risk and need for protection of public health ".

He attributes it call his in annoyance, where, as he argues, caused "the huge gatherings of our people, who want to bend them ", asking the rhetorical question: "A political leader cannot rally; Who forbids it; Who;». Having this approach to things, he wonders: "They think that this way they will stop the rallies; That is you; Most, whoever stands like that, will be nominally against us. The lies are over!

THE Faidon Vovolis speaks of "act of revenge" and "completely false accusation", noting: "I have never been bribed!!! Nor have I made a serious medical mistake (the two reasons, that a license may be suspended)! I had nothing to do with any dishonorable offense! I was not abused! I did not wrong! I did not break the law! So NO ONE can deprive me of anything. I DO NOT ACCEPT THE LAST PENALTY for something I did not do! All I do is STAND UP, saying with RESPECT and WITHOUT FANATICISM my medical belief for the BENEFIT OF GREEKS AND THEIR CHILDREN !!! Always active FOR the benefit of my patients!».

A few days before his hearing in his disciplinary case Medical Association of Athens The cardiologist he wonders, "The opposition that is; The Left, defending the Human Rights and the right of assembly;», while with a clear disposition to take on the shoulders of the weight of historical moments he says addressing the Greek people: "I came forward FOR EVERYONE. THIS IS THE TIME! If one of us falls, WE ALL FALL!!!». THIS IS HOW THE SYSTEM BEATS !!! THIS IS HOW THE GOVERNMENT WHO DOES NOT AGREE WITH IT !!! THE ABSOLUTE TARGETING ON A PERSON'S FACE TO BEND YOURSELF !!! The Medical Association of Athens THREATENS me with its temporary suspension license to practice with FULL FALSE indictment,because I did CONCENTRATIONS !!! I am called to APOLOGY FOR LIFE Wednesday 4 August 9 in the morning at their offices. 1-They were NOT rallies against any vaccine as they want to say BUT AGAINST OBLIGATIONS ! 2-They doubt the experimental phase of the preparations or the low mortality;;;

Let them prove WHY THEY ARE NOT VALID! There are MANY doctors who say these things and much more, but they target ONE !!! 3-It is FORBIDDEN to medically disagree with them;;SINCE WHEN;; TRUTH; And that is an act REVENGE by hitting my profession;; 4-After the order of the government through the mouth of an unprosecuted Themistocles who the day before yesterday told them that doctors who disagree should be marginalized and punished 'ACTED IMMEDIATELY !! Doctors have TROUBLED to open clinics to be politicized for THEIR MEDICAL OPINION;;; Ms. Themistocleous, in the end, the one who will be marginalized and punished will be the one who said such far-reaching NONSENSE and fascist-type challenges. !! ‘Charlatans’ because he mentioned the indecent his delirium(he had to resign),Ioannidis cannot be,Baghdi,Montagner,Kouvelas and so many others that WE JUST SAY SIMILAR WORDS! Besides, we do NOT make decisions.

In contrast to the other side that makes decisions and disagrees with itself every 4 months! Charlatanism involves the cubism of opinion ,the easily addressable opinion that causes the medical and popular feeling and that we DEFINITELY DO NOT HAVE. This is recorded in their hundreds of testimonies on the networks of critics ! I always work according to ‘Hippocracy Ethics'! I DO THIS NOW ! I keep the laws of Hippocrates to the fullest ! I had to be silent;; I had to plug it in and hide behind whatever convenience I had ,watching OUR PEOPLE SUFFER;;; NOT FROM ME ! WITH SO MUCH COURAGE, SO MANY ARE CRYING ONE;; THATOUS WE LEAVE SO; I WOULD NOT TOLERATE ANY PENALTY for such a thing for NO colleague told me any opinion! IS AN ATTACK ON THE MEDICAL BODY SHAME ON OUR REPUBLIC!