Awesome Tentoglou: Panhellenic record with 8.55 in the second attempt at the Indoor Track and Field!

Awesome Tentoglou: Panhellenic record with 8.55 in the second attempt at the Indoor Track and Field!

It was not to take shape Μ Miltos Tentoglou was invalid for millimeters in the first attempt he made in the final of the length of the Indoor Track and Field, but the second was what he wanted. Valid and impressive!

The gold medalist of Tokyo took off at 8.55, performance that is a new national record in indoor track and field. Actually, improved its own top performance in the country, which he kept from 2019 with 8.38 in Glasgow.

Respectively, this is the sixth best performance of all time in the indoor track.

Grevenio Olympian Miltos Tentopglou, won the gold medal and found himself at the top of the world.

The gold medalist of Tokyo made a Panhellenic record and broke his previous one, which had won the European Indoor Championships in Glasgow, when he had landed at 8,38 m. With this jump, Tentoglou achieved the sixth best performance of all time in the indoor track!

Tentoglou was marginally invalid in his first attempt, "Flew" in the second, while it was invalid on the third. He continued in his fourth attempt with 8.26m, made his fifth jump and closed with 8.51!

Immediately after his last attempt (his second best in the final with 8,51 m.) Miltos Tentoglou went to the side of the podium where relatives and Greek fans were found - who traveled by bus from his particular homeland, Grevena- took the flag they gave him and celebrated his success.

The final ranking in Belgrade:

The best performance of all time in the indoor track

Miltos Tentoglou: Silver medal in the long run at the World Athletics Championships

The amazing Miltos Tedoglou... touched gold with his performance in the long final at the World Open Track and Field Championships in Oregon,...

“Milto, the Grevenites everywhere, We express our heartfelt congratulations on your new great appearance at the World.... 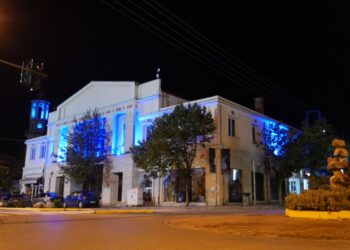 Municipality of Grevena: In "Tedoglou Time" the Clock - In the blue of Greece the symbol of the city for our World Champion - "Good Success Milto!»

The Municipality of Grevena, symbolically illuminating our historic Clock and the central facade of the City Hall with the colors of Greece,...

Dastamanis: "Tentoglou was the first of the first" – Congratulatory message from the Mayor of Grevena