17years invaded the home of a minor for 50 euro!

17years invaded the home of a minor for 50 euro!

An unprecedented incident occurred late last night (12.06.2021), starring two minors who broke into a house in the northern suburbs, in order to collect a debt of their order 50 euros from a 15-year-old!

The two 17-year-olds who knew that the parents of the 15-year-old were absent from home in the northern suburbs, they got into it and threatened, they knocked and searched all the places in order to find the money he owed them.

In fact, as the victim told police, the intruders searched all areas of the house and even caused damage in their attempt to find the money they were looking for. Finally they grabbed 15 euros and a bottle of champagne.

The perpetrators continued to harass the 15-year-old over the phone, threatening him to give them 100 euros that, as they themselves claimed, he owed them.

The frightened minor alerted his aunt who rushed to the house where the 15-year-old lives with his family and gave him the amount of 100 euro. This money, by order of the 17-year-olds, left the victim in the mailbox of his house from where the perpetrators took them.

When the parents of the unfortunate boy returned home, they immediately went to the local police station and reported the incident.

Another case of theft was investigated in an area of ​​Kozani

Theft of lockers in Psychiko: Expensive booty is sought in Germany

They bring a reversal in the case with the theft of the treasury of the lockers in Psychiko, καθώς νέα στοιχεία στρέφουν την προσοχή των... 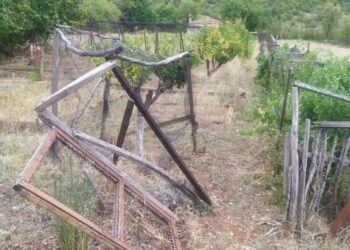 Galatini: They stole the grapes for the second time!!

They destroyed the fence and stole almost all the grapes from a one acre vineyard in the vineyards area of ​​Galatini. Is... A 44-year-old man was brought before the Autophorous Single-Member Court of First Instance of Rhodes, accused of attempted theft at a country house of the dead, που κηδεύτηκε στο...